A new Godzilla rises to terrorize Japan – and square off against his first adversary of equal size, the tenacious Anguirus! Directed by Motoyoshi Oda, 1955’s “Godzilla Raids Again” was […]

A new Godzilla rises to terrorize Japan – and square off against his first adversary of equal size, the tenacious Anguirus!

Directed by Motoyoshi Oda, 1955’s “Godzilla Raids Again” was the second film in the Godzilla franchise. Not only does it introduce the second Godzilla, who would go on to star in every other Godzilla film after the death of the 1954 original, but it also features the very first Kaiju battle! So right off the bat, you have several reasons to watch this sadly obscure and underrated movie.

The film begins with fishing cannery pilot Shoichi Tsukioka landing on desolate Iwato Island to rescue his best friend & fellow pilot Koji Kobayashi after his plane is forced to make an emergency landing. The two friends soon learn that they are not alone on the island however, and bare witness to a savage skirmish between two enormous monsters, before both combatants tumble into the sea. Upon returning to Osaka, Tsukioka and Kobayashi describe the monsters they had seen and Dr. Tadokoro confirms that one of them is indeed another of the same species as Godzilla, while the second is somesort of carnivorous “ankylosaur” called Anguirus. Dr. Yamane is also present for the meeting but alas admits that no weapon known to man is remotely capable of killing either kaiju, the Oxygen Destroyer which killed the first Godzilla no longer an option with Dr. Serizawa dead and his notes destroyed. However, Yamane does explain that Godzilla was attracted to/angered by bright lights during the 1954 incident, possibly due to memories of the Atom Bomb that mutated him, 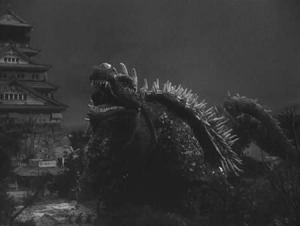 indicating that if a city wide black out were implemented flares could be used to lure Godzilla away from heavily populated areas. Godzilla comes ashore at Osaka and at initially the plan seems to work, but a band of escaped convicts end up causing a massive fire which draws Godzilla back to Japanese soil. As if that weren’t enough, the flares meant to distract Godzilla also had the unwanted affect of attracting Anguirus, and with both monsters on the prowl an epic battle ensues with Osaka as the battleground. Godzilla ultimately triumphs over Anguirus and leaves the city in ruins, forcing the company Tsukioka and Kobayashi work for to relocate. At first it seems things would return to normal for the duo and their loved ones and fellow employees, but Godzilla sinks one of their company’s ships, prompting the two pilots to do their part and rejoin the SDF. They soon track Godzilla to frozen Kamikawa Island and attempt to bomb him with planes from above, but the King of the Monsters continues to prove himself invulnerable. Kobayashi loses his life when Godzilla shoots him out of the sky with his atomic breath, his plane crashing into an icy mountainside, but in turn his death shows Tsukioka the key to stopping Godzilla, namely by bombing the mountainside and burying Godzilla in an avalanche. The mission proved successful and Godzilla would remain buried in his icy prison until the events of “King Kong vs Godzilla.”

Monsters & Special effects: Now, as the second Godzilla movie ever made, as well as featuring the first monster battle, you shouldn’t watch this film expecting Heisei era or Millennium era level special effects, but nevertheless, the effects done for this movie by Eiji Tsuburaya are quite impressive for their time. The Japanese model cities (especially Osaka Castle), the rocky terrain of Iwato Island, and the icy landscape of Kamikawa Island, are

beautifully designed and convincing. The Godzilla suit used for this film, dubbed “Gyakushugoji,” was more or less identical in appearance to the first Goji costume, only now it was greatly slimmed down to permit the suit actor within greater freedom of movement during fight scenes with Anguirus. The Anguirus suit was well made as well, and was the first quadrupedal monster, the beast’s overall appearance being that of a spiny, flesh eating equivalent of a plant eating ankylosaurus (something we can overlook due to the limited knowledge of dinosaurs back then, as well as the fact that Anguirus is a radiation spawned monster like Godzilla). Though armed with no ranged attack capabilities like Godzilla, Anguirus is portrayed as a vicious and tenacious melee combatant who makes good use of his razor sharp teeth, claws, and spine covered tail, his thick hide and armored back seemingly defending him from the worst of Godzilla’s atomic breath (he took the Big G’s flames to the face and suffered little damage). Though Godzilla kills Anguirus during their climatic showdown, this wouldn’t stop him from making multiple appearances in later Goji films and becoming a fan favorite, the second Anguirus becoming known as the Monster King’s best friend rather than his nemesis, though they’d be enemies again during the Millennium era’s “Godzilla: Final War” film. I especially enjoyed the scene at Osaka Castle where Godzilla and Anguirus seemingly size each other up looking for openings in one another’s defenses, like real animals preparing to move in for the kill. Also impressive were the military’s desperate attempts to subdue the monsters with artillery fire even as they grappled for dominance, neither kaiju paying any attention to humanity’s best efforts to thwart them. The icy mountain peaks and avalanche used to entomb Godzilla at the end were also rather convincing, even though we fans know it was but a temporary setback for the King of the Monsters.

Human Actors & characters: The main characters Tsukioka and Kobayashi were played by Hiroshi Koizumi and Minuru Chiaki respectively, and the buddy duo endear themselves to you quickly as they go from being mere fishing company pilots baring witness to Japan’s second Kaiju threat to fighter pilots risking their lives against impossible odds. Actress Setsuko Wakayama plays Tsukioka’s girlfriend and fiancee Hidemi Yamaji, who works as a radio operator at her father’s company, but she’s not amongst Toho’s most memorable heroines since she doesn’t do much besides worry about her loved ones and interact with them when they’re not busy dealing with Godzilla and Anguirus. Yukio Kasama plays the company president and Hidemi’s father, Koehi Yamaji, and while he does not participate in any of the action, he gives a stirring performance during the scene in which he’s forced to watch his company’s headquarters be reduced to fiery rubble by the monsters. Takashi Shimura reprises his role as Dr. Kyohei Yamane and does a fantastic job despite his limited screen time, showing a film reel of the first Godzilla’s 1954 attack on Tokyo before grimly explaining how helpless they are against the second Godzilla and Anguirus. Masao Shimizu plays the role of Dr. Tadokoro, the zoologist who identifies Anguirus and describes his nature and abilities, and while he does a good job, I couldn’t help but wonder why they didn’t just have the more established character of Dr. Yamane handle all the science talk himself since at that point in time he was literally the best authority on prehistoric monsters having lived through the first Godzilla’s attack. One of the most interesting aspects of “Godzilla Raids Again” is that it focuses alot on the impact the warring monsters have on the human characters, just like in the original “Gojira” film. We see the endurance and determination of the characters put to the test when they are forced to pick up the pieces of their shattered lives in the aftermath of Godzilla’s battle with Anguirus, and even join the struggle against Godzilla when it becomes clear the Big G is not done with them yet. We also see humanity at its best when Tsukioka, Hidemi, and Kobayashi try to get on with their lives and have a good time at a company party, Kobayashi actually seeking the aid of a matchmaker to find himself a bride, as well as see humanity at its worst when the carelessness of the escaped convicts lure Godzilla back ashore, and ultimately find themselves killed in the midst of the kaiju battle that follows.

Conclusion: “Godzilla Raids Again” is an enjoyable movie for any fan of the Kaiju genre, especially someone interested in the history of Godzilla and the origin of Japanese monster rumbles. Fans of Godzilla’s old bud Anguirus will enjoy his portrayal as Godzilla’s very first rival, his battles with Godzilla are very intense and mostly melee oriented, with a few

shots of Godzilla’s atomic breath here and there for good measure. Also, fans who prefer to see how the monster’s actions affect the human populace will be happy too, in sharp contrast to films in which the monsters are shown causing alot of damage but we don’t witness the fates of the people caught in the middle of their attacks. However, while the original Japanese version of the film with English subtitles is sure to please, the English dubbed version is just awful. The English dub was originally entitled “Gigantis the Fire Monster” because the American distributors feared U.S. audiences would be confused by the appearance of another Godzilla unless it was clearly established to be a separate monster, even going so far as to replace Godzilla’s trademark roar with Anguirus’s howl (which makes it difficult to tell who’s roaring during fight scenes, and confusing to see Godzilla announcing his arrival with another kaiju’s battle cry). Kobayashi’s English voice actor also made the tragic hero sound like a slow witted idiot. So in short, if you do pick up this film, steer clear of the English dub and enjoy “Godzilla Raids Again” in the original Japanese version with English subtitles, both versions being available on DVD. I give the Japanese version of “Godzilla Raids Again” a four out of five, be sure to give this overlooked kaiju classic a look and you won’t be disappointed.