I’ve been really excited to get this series off the ground for quite sometime now, and I couldn’t think of a better person to get us started! The lovely Ms. […]

I’ve been really excited to get this series off the ground for quite sometime now, and I couldn’t think of a better person to get us started! The lovely Ms. Youmans is a fandom contact of mine, and besides being an incredibly talented artist – she’s also proven herself to be quite the asset to the fandom. Skreeonkers, I present to you the very first Artist Spotlight on the one and only Brittany Youmans! 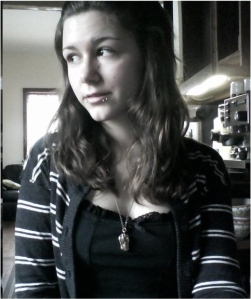 My name is Brittany Youmans, better known as Fairy Mothra on Toho Kingdom, where I’m a moderator. I’m 20 years old and I live in Rhode Island with my boyfriend and our two pet rats. I’ve been into giant monsters ever since I can remember, and I’ve been drawing ever since I can remember, too. I’ve always had a very intense interest in art and I have drawn almost every day for the past 15+ years – I kind of can’t help it. I’ve completed my first two years of study for my Visual Arts degree, but for various reasons I’ve had to put that on hold, though I plan on returning to school in the near future to focus on Illustration. I have always had a particular passion for drawing fantasy and sci-fi subjects, so kaiju have always been one of my favorite things to draw. I do enjoy life drawing and doing still-lifes, but to me nothing tops creating something straight from my imagination or recreating a favorite monster or movie scene.

Jon @ UnCanny: When did you become interested in the ever-unique world of Japanese Giant Monsters?

–I loved dinosaurs as a kid, so it probably wasn’t much of a jump into liking Godzilla. My earliest memories of Godzilla are watching the movies on TV with my dad on the weekends. My dad also fostered my love of Godzilla by buying me the Trendmasters toys. He died when I was 11, so that’s one of the reasons I have such strong feelings of nostalgia for Godzilla. Watching the movies brings me back to good times. And come on, giant monsters. So cool.

Jon @ UnCanny: What are some of the earliest memories you have tied to creating your own renditions of your favorite monsters on paper?

–I remember seeing the ’98 Godzilla in theaters and being completely blown away (I was 6 at the time, okay?). I probably drew Zilla on every school paper I handed in in the first grade. I particularly remember showing my teacher a drawing I’d done of him, and her not being able to figure out what it was. I was pretty offended.

Jon @ UnCanny: Have you ever made a fan or peaked a non-fan’s interest with your art? What does the “outside world” think of your lovely works?

–I drew kaiju stuff a lot in high school, and pretty much all of my classmates thought it was cool. They would always ask me the names of the monsters and stuff like that. And my teachers would always say they remembered seeing the old movies and would try and remember monster names. They thought it was interesting, I guess.

Jon @ UnCanny: Some of my favorite pieces of yours are described as “simple sketches”. Do you just begin doodling and see what comes out – or do you plan out most of your works?

–Sometimes I get an idea and it won’t go away until I draw it, and sometimes I just sit down and doodle. Usually I end up liking the doodles and sketches the most. The spontaneous stuff sometimes has better movement and flow. The stuff that’s been planned out and sketched and re-sketched and outlined and colored can end up looking stiff. Not bad, but just not as organic.

Jon @ UnCanny: You have an incredibly striking and unique style when it comes to Kaiju portraits. Which beasts do you enjoy drawing the most?

–Anguirus is always one of my favorites. I just love conveying his personality, he’s so scrappy. Godzilla is another obvious favorite. I love drawing Rodan too. I tend to prefer the characters with simpler designs. Sometimes I’ll get the urge to draw something really detailed and complex, but usually I like the simple ones just for the ease of conveying expression.

Jon @ UnCanny: Each of your Kaiju has life in their eyes, I can almost see them thinking behind the paper. What inspires you when putting that life into each individual Kaiju as a character?

–I find the kaiju that are most interesting to draw are the ones who have the biggest personalities in the movies. Those traits pretty much inspire me to draw them in the first place.

Jon @ UnCanny: Your depiction of the famous ‘Godzilla Raids Again’ battle between the Big G and Anguirus has garnered quite a bit of attention. What did you use to create such a striking visual style, and what other battles can we hope to see you recreate next?

–Haha, yes, that’s one of my favorites actually. It’s hard to believe it’s been so long since I made it – almost two years. It just reminds me of how little I draw now compared to then. A bit depressing! But anyway – that one was done with grayscale colored pencils on gray pastel paper. I loooooove drawing on neutral colored papers and using white for highlights. You get a lot more depth than you do on white paper. I have a lot of ideas for more epic pieces floating around in my head, but don’t really have the time to put them on paper. I’d love to do Showa Godzilla vs Mechagodzilla, or a King Kong Escapes piece with Kong, Mechanikong, and Gorosaurus – like the publicity stills with all three monsters in the snow. Maybe even a Destroy All Monsters final battle piece one day. It’s a bit hard lately with working so much and my art supplies all packed away, but I’ll get back into the swing of things eventually.

Below is a gallery of Brittany’s excellent works. Be sure to visit her Deviantart Page to see more and support her amazing artistry!

I’ll be back with another installment of Artist Spotlight in the near future! Until then, enjoy all of the Kaiju Vinyl Profiles and other exciting new developments here at Skreeonk.com!