A very generous and eager employee of Echo Bridge has joined the Toho Kingdom Forums fray! The kind soul, known as MXG744,  first released the draft-cover for their new release of GvsBio in conjunction with Miramax. We broke the art a few days ago, but now I’ve received personal permission to keep the art up. Here it is! Check the rest of the article below the cover for some excellent excerpts from MXG744 on the release! 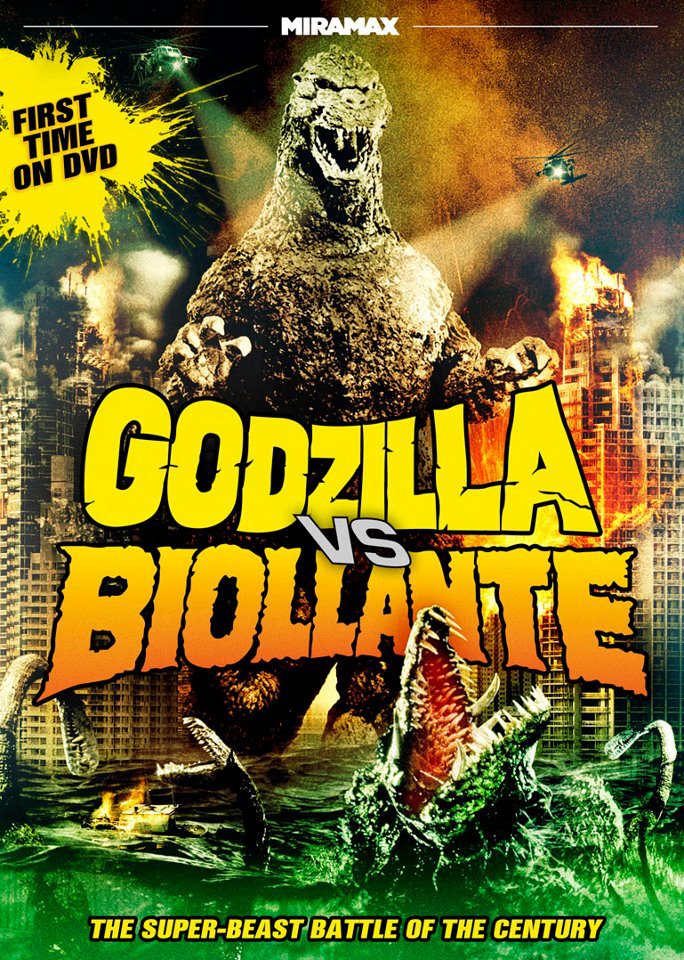 Echo Bridge’s DVD department has quite a bit of experience in “fandom” entertainment, having released many Asylum titles, among other sci-fi and horror films (etc). The cover art above has received several comparisons to Asylum DVD cover art, which now makes sense. Some of the same fans making these comparisons over at Toho Kingdom have spoken out to MXG744, and here’s what he had to say on the matter:

I actually sent almost all of you guys’ art related comments on to our marketing and art design team, maybe they can do something with it. What would you say if we offered a printable alternate cover like a few video games in the past have done?

Sounds pretty sweet, eh? He also had this to add:

Also, I just got two approvals this morning. It looks like we have the OK from Toho for us to use some of the bonus features from their BD release. And I got the approval to work with Ed G on some supplemental bonus features from my bosses as well. So now I just have to figure out English subtitles and how much we can fit on the disc.

Special features? Check. Ed Godizewski’s involvement? Check! This release seems to be shaping up nicely! And we can thank Mr. MXG744 specifically. Apparently, Echo Bridge almost released a very sub-par version of GvsBio a year ago:

I am currently managing the authoring of just over 100 DVDs and BDs mixed. That number is in fluctuation all the time and is odd to consider really. When I started this position in 2005, I only managed the authoring of around 500 discs up through 2007 when I moved on to some other duties for a few years. Now we are regularly authoring 30+ per month and have big upswings like right now every 6 months. In just the last 10 months we have authored 800+ discs!So, yeah, GvB is very special. There are a lot of films and discs that don’t even get a second thought about them here. We just churn them out and no one thinks about it. I’m truly excited and happy that I convinced my bosses to stop the release last year. I don’t think I ever told anyone on this site, but we were sooooo close to releasing the DVD last year with audio that I think sounds worse than any previous release, and the video wasn’t much better. Everyone just thought we got a master for the film, so it must be good. Somehow though, in some strange moment of G-inspiration, I just said no. I told them its unacceptable and unfixable. Now here we are, well over a year later and the master is close to acceptable and we are looking forward to a release both we and the fans can be proud of, hopefully!

And for that, we all thank you Good Sir!
With the release of GvsBio – only Godzilla 1985 stands unreleased on a Region 1 DVD. This is the icing on the cake:

…No one has released Godzilla 1985 on DVD in the US before, so maybe I can convince our acquisitions team to look into that if this release does well.

That would be fantastic, indeed! Lets support our fandom and these future releases by purchasing Echo Bridge’s Godzilla vs Biollante DVD/BluRay, yes? I know I will be!
MXG744 has discussed the possibility of some GvsBio exclusives here on Skreeonk.com, so stay tuned for more news! Until then ,True Believers!
Jon @ UnCanny