Happy August, All! Here’s the news, straight from Jim Jomei!        Following on the heels of last year’s Bandai USA release of the first wave of Fusion Series […]

In prototype shots, each of these new Fusion Series figures looked great and generated a good deal of enthusiasm among even some collectors who have thus been unimpressed with the line. What has actually seen production is a mixed bag.

As mentioned previously, the line includes standard interpretations of the characters–previously available in past waves of the line–as well as versions cast in translucent vinyl. Specifically, Rainbow Mothra is cast in clear blue vinyl for the wings, head, and front legs–beautifully painted with the Mothra details one expects–and a clear gray for the abdomen. The gray, however, is not as immediately noticeable as the gorgeous blue on the wings. The Rainbow Mothra stands out as the clear winner of the pack, its translucent, glittery blue perfectly complementing the look of the figure and meshing well with the character design. In short, this is what a Fusion Series figure should be. Amplifying the effectiveness of its Fusion stylings is the fact that, out of all the Bandai Creation/Bandai USA figures, Rainbow Mothra is the one that has met with the widest praise, with many declaring that it trumps the original Japanese figure. The long and short of it is that this one is a must-have if you dig the Fusion Series motif. 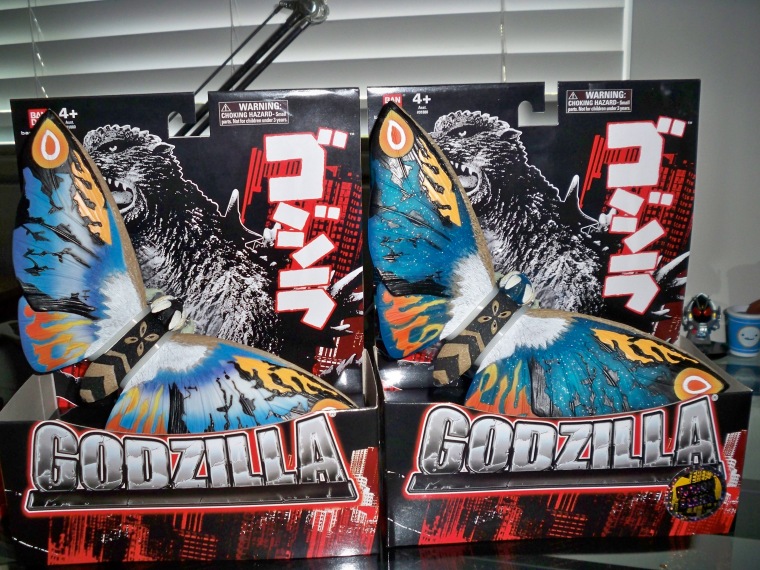 While Mothra exemplifies creative use of the Fusion Series look, Burning Godzilla and Millennium Godzilla seem phoned-in, especially when compared to their prototypes. Burning Godzilla’s prototype looked as though the body would be largely cast in black vinyl but with certain parts–specifically the dorsal spines and the expected fiery patches–cast in a translucent orange/red color. It looked pretty damn cool even though the sculpt is arguably inferior to the Bandai Japan version.

However, the figure I saw in stores failed to impress. The first big issue is that, unlike the prototype, this Godzilla is cast in the same translucent gray used for Godzilla ’68 in the previous wave. To achieve the “Burning” look, there’s some metallic-ish orange paint. I’m not sure if it was painted on or injected into the vinyl, but either way, it’s just not attractive, and it loses all the pop that the prototype had in the contrast between the black vinyl and the translucent, “Burning” orange. On the positive side, I’m told that the tail sculpt has been improved, but I can’t personally confirm that. Overall, I think the regular version looks better, and a great opportunity to make a neat little vinyl was missed, sorry to say. I recommend the standard release or, better yet, the Japanese one.

Rounding out this batch of Fusion Series figures is Millennium Godzilla. Like Burning Godzilla, this figure is unfortunately cast in lackluster gray with spine highlights applied on (in?) the dorsal spine vinyl. What can I say? I’ve always been a fan of this sculpt and this Godzilla, so I can’t dismiss it as easily as the Burning Godzilla. That said, the Fusion Series gimmick is largely wasted again, though this is probably the most attractive Godzilla to be attempted in this style (at least by Bandai USA). It’s a wonder and a shame that they didn’t try any colors more daring than the gray. If you don’t have the standard release, I recommend picking that up, but get the Fusion if it tickles your fancy.

I came home with both versions of Rainbow Mothra and couldn’t be happier with them. It’s a joy to buy a well-done Godzilla vinyl figure in a local store for $10-15, and, even if some of the figures weren’t what I had hoped, I encourage you to go check them out yourself. With these three, the previous wave, and the Tokyo Vinyl figures all on the market, there’s sure to be something worth your while!

Jim Sullivan is a moderator at the Toho Kingdom boards and all around kaiju collecting enthusiast.All photos used for this article were personally taken by Mr. Jomei for his own collecting and research purposes. Expect more from this good man in the future!