ULTRAMAN TIGA & ULTRAMAN DYNA: Warriors of the Star of Light (1998)

The following is a summary of the original Japanese film by contributor 20th Century Boy: Ultraman Tiga and Ultraman Dyna is a 1998 movie released theatrically by Tsuburaya Productions, running […] 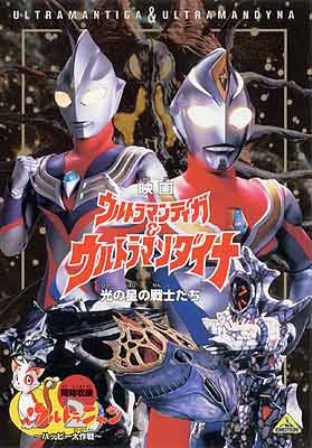 The following is a summary of the original Japanese film by contributor 20th Century Boy:

Ultraman Tiga and Ultraman Dyna is a 1998 movie released theatrically by Tsuburaya Productions, running at a little under 70 minutes. Don’t let the name fool you, however. This is more of an Ultraman Dyna movie than an Ultraman Tiga movie. For many of us who have only seen Tiga and never seen Dyna, this can be a little disappointing. Ultraman Tiga doesn’t even appear until the final battle, and his human host Daigo doesn’t even appear at all. You do get a reunion of the Ultraman Tiga cast at the end, though. That brought a big smile to my face. However, I honestly found it a little hard to be invested in this movie. Maybe it’s because I haven’t seen Ultraman Dyna, and I have no idea who these characters are. Thus, I have no reason to care for them. The special effects also feel too TV-ish, despite being a theatrical production. Overall, I would say that this is a pretty skippable entry, unless you’re really into Ultraman Tiga (like I am). If you are, you’ll love the third act.