The Year of Godzilla indeed!

Toho has officially announced their intentions to revitalize the famed series where it all began – In Japan! The success of Legendary’s film has rekindled the homeland’s love of the world’s most famous giant monster, and he will stomp back to fervoring life in 2016!

Kaiju Guru and all-around-awesome-dude August Ragone has an excellent write up on the matter at his blog THE GOOD, THE BAD, AND GODZILLA 続・夕陽の呉爾羅! Click the link to head over and get all of the details from a true pro. We’ve included snippets below with our very own Hype Poster, but be sure to read the article in full over at August’s blog! 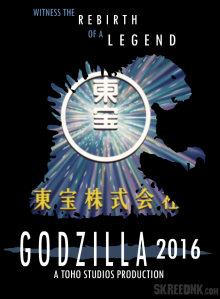 Toho Company Ltd. will be producing an all-new Godzilla film to be released in 2016. This will be the first “Domestic Godzilla” in 12 years since GODZILLA FINAL WARS (2004). In a press release issued today, Toho announced they’ve launched the “Godzilla Conference” as an organization to discuss and decide a wide range of strategies for promoting the Big G, including, but not limited to motion pictures. The group has also been officially nicknamed, “Godzi-con” (or “Gojikon” in Japanese parlance).

“With the success of the Hollywood version of GODZILLA, we decided on a new [domestic] production,” said Mr. Ueda in today’s press statement. The new production will be handled by Toho, in-house. “The screenplay is currently in development and we plan to start shooting next summer. We cannot announce cast or staff selections at this time. And we’re still deliberating whether to bring Godzilla to life via CGI or man-in-suit,” said Mr. Ueda. “This resurrection will be the centerpiece for ’16, and this is the force of our words.”

“The passionate voices of the fans clamored for a resurrection [of the Japanese Godzilla]. We will bring the monster back to Japan, with the high-quality we’ve given films like [Takashi Yamazaki’s] PARASYTE (Kiseiju, 2014). By bringing together our collective know-how, which we’ve been striving for [over the last 12 years], we mustn’t lose to Hollywood,” he said with confidence.

We’ve just created our own TOHO’s G-2016 page to keep you up to date on all of the latest regarding this film. Are you excited yet!?