Hey fandom, Jon D. B. here. Let’s discuss the hotly anticipated Shin-Gojira a.k.a Godzilla: Resurgence, shall we? But first, a little message to our wonderful readers, followers, and friends alike: […] 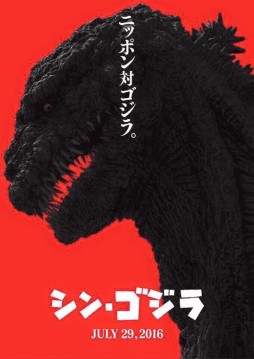 Hey fandom, Jon D. B. here. Let’s discuss the hotly anticipated Shin-Gojira a.k.a Godzilla: Resurgence, shall we? But first, a little message to our wonderful readers, followers, and friends alike:

Sunday, January 3rd was quite the day for Godzilla fans on social media – several photos from trusted Japanese sources (and friends of the fandom) were leaked via facebook and tumblr. This resulted in many online groups spreading the images like wildfire, which eventually lead to a few bigger sites picking up the scoop and running with it. We, however, chose to stay out of it (and still are as far as the images are concerned) and here’s why:

Yes, it can be frustrating to some for us to hold out such a huge scoop from readers – We’ve developed a wonderful community & following and honestly try to keep you all as up-to-date as possible while also being entertained. Those images, however, have no business seeing the light of day outside of the people they were originally shared with in confidence. Each of those photos was taken discretely and then shown to trusted friends never to be spread elsewhere. We, like many others who were capable of keeping such images under wraps, did not post or capitalize on these images simply because when you give someone your word it should be just that – your word. Regardless of the proverbial cat now being out of the bag – we still will not be contributing to their spread – or more importantly, breaking the trust we have developed with our sources close to the production. That being said I’d like to apologize to all the fans sending us messages asking for the images as we will not be responding. Rest assured the images are available…. Well everywhere now. So don’t fret! We promise that keeping up good relations with our sources is much, much more beneficial to us all than the momentary high that comes from showcasing  a few hot images.

So what do these images mean, anyway? We may not be posting them – but we know you’ve seen them! What are we looking at?

Sharp eyed viewers will note that the Godzilla showcased in these grainy cellphone pics is ‘exposed’ – heavily scarred via radiation and void of the rough, impenetrable hide we associate with Godzilla by default. His facial features are no doubt the same as the design seen on the new poster (top left), but is everything else? No, not really – and here’s why:

Another source close to production has discussed plot details for the film – and they are exciting to say the least. At this point, we will be getting into spoilers – so if you would like to remain virginal to the onslaught of ShinGoji then please, be aware from here on as we will be delving into tips, rumors, and speculation all at once. Keep in mind this is all just that – speculation – and nothing has been confirmed.

Now that we’ve seen this new design prematurely, it may be important to put it into context so we can all sleep at night: If this all pans out – Godzilla will be taking several forms in Resurgence – And not just two, but three are rumored. We’re betting on more of a metamorphosis than actual forms – but at this point we know very little as TOHO is remaining tight-lipped. How do the new images play into this, you ask? Quite heavily, actually – as all of these leaked images may be an early, first form of Godzilla. Our titular monster may start out the film as a damaged, rage-fueled & super-pissed kaiju scarred and mutated from nuclear radiation. As the film continues he could take other forms or heal, gradually changing into the thick-hided King O’ The Monsters we all know and love. We believe this final design is reflected in the above poster, as well as the news snippets seen via sources in Japan: 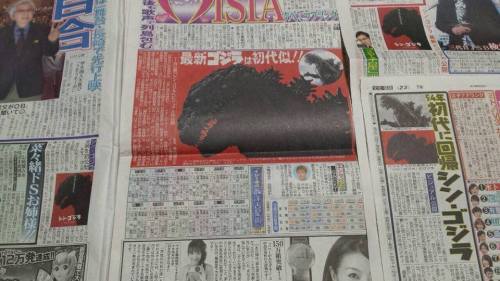 Note how Godzilla’s design is seen extended here and includes his traditional, fleshy-bone-combo dorsal spines. These do not exist on his early form (in the leaked photos) – as they have  either been A.) Burnt off by a nuclear blast or B.) Haven’t regenerated yet…

Wait – haven’t regenerated, you say? What could this possibly mean!? Here’s what we’re hearing:

Shin-Gojira will be a direct sequel to the original Gojira released in 1954. This plot-device has been exploited by Toho several times over now to legitimize new entries – they will tie in a new film directly to the original ’54 classic whilst ignoring all subsequent sequels. We’ve seen this before with the beginning of the Heisei era via Godzilla 1984, as well as several times in the Millennium series with G2K, GMK, the Kiryu saga, and even Final Wars to a certain extent – All choosing to start new storylines spawning from the original. Chances are if you’re reading this you already knew all of that  – so why bother reiterating?

The answer to that is rather exciting, really – as we’ve also been tipped off from a source that chooses to remain anonymous that Shin-Gojira just may be the actual reincarnation of the very first Godzilla. This is a completely separate tip – and one that could hold true even if Godzilla looks the same throughout the movie. The leaked photos show a scarred, almost-weak looking yet still horrifying Godzilla – one who has most certainly seen better days. The bones in his hands seem fragile, exposed even – as is much of his greater musculature. Our source hints at this being his new form in the state of regeneration… from the original Godzilla skeleton. Ol’ Goji’s bones made a return from in 2003’s Tokyo S.O.S – so why not again? The 1954 classic ends with Godzilla’s bones sinking to the bottom of the sea, correct (see above)? Godzilla is also known to have extreme regenerative properties, yes? Well, one plus one does in fact equal two and if we were a betting website we’d say our source is correct and we’re about to see the resurgence of the original Gojira. Let that sink in – and if it doesn’t get you all goosebumpy then we don’t know what will.

We think a few other hints have been thrown as well – but no one has really talked extensively about it – so let’s! 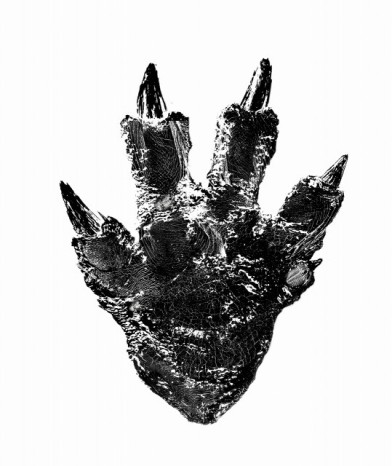 Remember this wonderful footprint first showcased to us all early in 2015? This bad boy is not only very reminiscent of the original Gojira’s foot design, but also includes a trilobite on the smallest toe. Click the image (above) and check it out if you were previously unaware.

The tiny outside toe is in fact a trilobite. Not just any trilobite, however – this is the exact same fossil exposed in Godzilla’s wake in the original film! Check it out:

Combined with what our sources have told us and other sites are picking up on – we’d wager on this being a subliminal yet huge hint – rather than just a neat callback. Why else would they throw this exact trilobite into the very first promotional image for their biggest film of the decade? This little guy suggests Shin-Gojira is an entity very much related to the original beast that started it all… or him entirely.

We also know for a fact, thanks to directors Hideaki Anno and Shinji Higuchi directly stating so, that their film will utilize a combination of modern-day-CGI and old school Tokusatsu (suitmation and prop work). The leaked images showcase a giant puppet/suit mixture and we’re betting the later forms he takes will too be realized in this traditional sense (thanks to Godzilla-veteran Shinji Higuchi’s directorship). It may be safe to assume that the mixture of CGI and props will be instrumental in showcasing Godzilla’s heavily-rumored transformations over the course of the film. How amazing would it be to see several practical Godzilla suits/props showcased throughout the plot – each transformation’s metamorphosis realized with modern special effects? This fits with every rumor we’ve heard: Again, very exciting to ponder!

As exciting as that would be, there is still every chance that Godzilla may be in this revealed state throughout – our aforementioned ‘option A’ – a pure rage-monster fueled by his own seething pain. Both, in our opinion, will be equally fresh and interesting to behold. 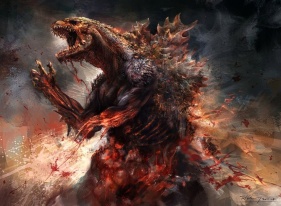 All of this considered, the new design’s leak has polarized the fandom (to put it lightly). This should be expected, however, as it’s an extreme look for the Big G. He’s horrifying – directly delivering on the “nightmare” vision our talented directors promised. If you are one of the haters, however – and we use that term jokingly – consider everything you’ve just read. Knowing all of this, picture a film that begins with the O.G. Godzilla reawakening via modern-day nuclear catastrophe of epic proportions. His body is regenerating throughout the film, taking several forms as his intense rage and hatred is again wrathfully brought upon mankind for their mistakes. Within this context, are you now a bit more excited to see such a harshly new design realized?

Edit: One of our readers, Joseph Rouleau, has an interesting point. After reading our article he’s addressed the ‘size issue’, shall we call it:

Joseph Rouleau: The only issue is the size. If he just regenerated, why would he be about 3 times his original size at 389 feet?

Knowing Toho and the creative team, I’d say they’re using the original and it’s metaphors as a launching pad rather than caging themselves to it so literally (quite like S.O.S bringing back G’54’s bones after they clearly bit the dust in the original film). Toho has done this before: GMK Goji (60 meters) is supposedly the same entity as the ’54 incarnation (50 meters) – yet is much larger with a radically different design. Creative liberties are not necessarily damning or a bad thing! This is, however, still a very valid and interesting point – something to consider alongside these tips and speculation. 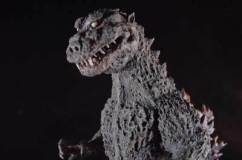 We strongly believe ShinGojira will end up looking like a nightmarish version of the original 1954 maquette (left) by the end of this summer’s film – which is very much the inspiration for this newest incarnation. Whether that is by metamorphosis and different forms or simple addition of color-grading and SFX remains to be seen. His head is made to resemble a mushroom cloud – a shadow of the very terror that awoke this force of nature. It was just as jarring to us as it was to most to see those images for the first time when we did… seeing Anno and Higuchi go for such an Attack-On-Titan-Esque Godzilla was a bit of a letdown, really. But knowing what we know now – and speculating on it – has us much, much more excited. I sincerely think we are in for a real treat – a film that will see Godzilla transform back into a nightmare from the depths of human consciousness… materializing and haunting us all over again. And hey – if not – we’ll still be getting one hell of a ride with a garish new design.

Godzilla: Resurgence hits theaters in Japan this summer on July 29th, 2016. Are you ready?

Let us know in the comments below or by getting in on the conversation at our Facebook Page! Until then!