Happy Saturday, world! Jon @ UnCanny here. Legendary took to Twitter today releasing this greenscreen heavy behind the scenes look at their upcoming Godzilla, which hits theaters less than a […]

Legendary took to Twitter today releasing this greenscreen heavy behind the scenes look at their upcoming Godzilla, which hits theaters less than a year from now. The photo reveals Gareth Edwards hard at work – he’s framing a shot for what looks to be either a torn subway car or rail train. Either way, just the thought of a train like locomotive getting thrashed by Goji in the new film gets me very excited! 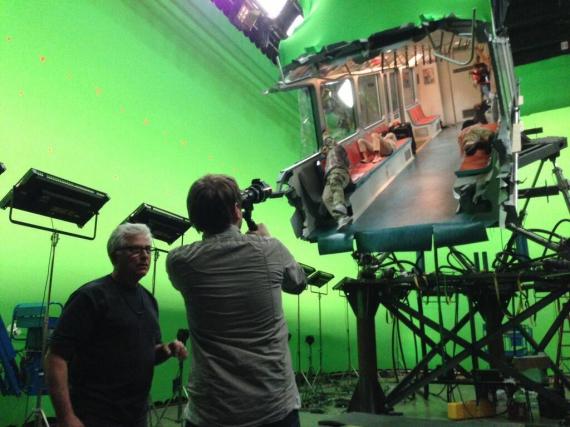 I’ve also rounded up the best photos from the past week of shooting for our official image gallery HERE – and I’ve left out most of the redundant shots. Here’s a few of the best images:

And last but not least, check out this video from the set HERE!

More as it happens!

Happy #Ultraman Day!
GODZILLA SINGULAR POINT will hit Netflix for streaming in the U.S. on June 24, 2021!
Now here's a phenomenal Mechagodzilla design! Would you have preferred this version in the film?
If you aren't already excited for @insighteditions GODZILLA VS KONG concept art book, then you should be for the #DOUG concept art alone!
SAVE THE EARTH! Happy Earth Day, kaiju fans!
China is celebrating GODZILLA VS KONG's success with this absolutely stellar new #MonsterVerse poster!