Skip to content
SDCC Wraps Up, and We’ve got the Good, the Bad, and the Shwaaat!?
Legendary's Godzilla Series

SDCC Wraps Up, and We’ve got the Good, the Bad, and the Shwaaat!?

It has been an absolutely insane week for our fandom – and Godzilla has emerged for the second year in a row as one of – if not THE most – talked about properties at San Diego Comic Con. Now that the madness has passed I’ve gathered a recap of sorts – and we’ve got everything from excellent interviews to bizarre news to cover.

We’ll start with the ‘bad’ news, and it really isn’t even that. A kaiju enthusiast on Facebook brought forth this shocking piece of news – and honestly, I don’t think anyone saw this coming.

From Kaijucast: “They won’t be unveiling the figure. I interviewed the Bandai representative on Friday and he said they don’t even have anything under that veil.”

“They don’t even have anything under that veil.”

“THEY DON’T EVEN HAVE ANYTHING.”

This is… sort of genius. The entire online Kaiju community stayed glued to their computers for all 24 hours of Saturday (the 20th) awaiting the reveal of Bandai’s new Godzilla figure. It was assumed that the figure would reveal the finalized sculpt of Legendary’s beast in the form of a U.S. Bandai figure. What we got was nothing more than an elaborate publicity display… and an honestly successful attempt at building anticipation. Some fans are ticked off – and I suppose I understand people feeling let down, but we’ve got to be able to have some fun with all of this. We don’t want to see everything up front, do we? DO WE?
Well played, Legendary.
———————————————————————————————–
Next up we have the first real interview for the film – Shocktillyoudrop.com scored an absolutely fantastic interview with director Gareth Edwards once the film had wrapped shooting – and its our first real look into the hardworkings of this films characters, plot, and titular monster. Make sure you read the full interview here – but I’ve included some highlights below.
What this confirms for us is exactly what I’ve been saying here at Skreeonk all along – this isnt the 100% design, but it clearly represents very closely what we will be seeing on film. Straight from Edwards’ mouth – Boo Yah! Read on for more below:

Edwards:We tried to find the right story and path through this Godzilla universe where the characters were connected to the events in the movie where it didn’t feel forced and would also get you to the places in the story you wanted to experience.  They were tagged on but embedded in the journey of the movie.  I’m really pleased with what we came up with.  A lot of the actors, I think, got on board because they had an emotional connection with the people which was one of the goals when we set out to do this.

The above snippet is great -I really dig just how much passion and consideration Edwards is pouring into every facet of this film. He’s old school, and I love it. This next excerpt, however, is my personal favorite… You know what – I’m literally just going to post the rest of the entire interview. Its that good.

Shock:  Godzilla, what does he represent here for our time?  Does he have a personality or is he merely this unstoppable force of nature?

Edwards:  It’s funny because just like when you write a screenplay, these characters…you never get to know them until the actor turns up and starts delivering the lines and you’re like, Oh, it’s there.  It forms in front of you and it becomes a real person.  It’s the same with Godzilla in that I always viewed him as a force of nature.  He’s not like King Kong where there’s a personality.  Godzilla is definitely a representation of the wrath of nature.  But we’re in the process of visual FX and I’m starting to see him and his personality is coming through.  It’s interesting.  I’m happy and surprised.  We saw early tests and my reaction was like Internet dating or something [laughs], suddenly you’re meeting him for the first time and you go, he’s real.  It’s probably going to develop more personality as we go on and my answer might be different when we’re done, but he definitely has personality from the icon he is.  We’ve taken it very seriously and the theme is man versus nature and Godzilla is certainly the nature side of it.  You can’t win that fight.  Nature’s always going to win and that’s what the subtext of our movie is about.  He’s an anti-hero.  I wouldn’t describe him as a good guy, but he’s not evil personified.  He’s the punishment we deserve, you know?

Shock:  The film is said to be more grounded and “real” so how to you plausibly handle his creation, his atomic breath and other elements?

Edwards:  It was important to me to make it as believable as possible and with all of those elements you’ve mentioned, they’re in the film but I tried to put them in the film where they’re not so fantastical that you don’t believe it.  Hopefully, the only big buy the audience has to make – and I believe there can only be one buy – is that giant creatures can exist.  Beyond that, we try to make it as realistic as possible.  Throughout the franchise, there’s consistently been these elements related to Godzilla and they’re in this film, but it was about making it feel natural in our film.  I can’t go into much more details.  There is a nuclear element in the movie.

Shock:  Working with Toho on the design, how involved were they?

Edwards:  They were very much involved.  We were showing them designs throughout.  We showed them the final designs and we were refining it, but they approved of the final look.  It was important to me that this felt like a Toho Godzilla.  I went to visit them in Japan and they came out to the set.  There’s always this fear when you’re working on something with a legacy…who am I?  This young-ish British filmmaker handling their property.  But they feel we’ve stayed true to their roots.  In the encyclopedias and books you read about Godzilla, there’s these different groups – all of the Godzillas in one section and then there’s the American [1998] film.  I’d love ours to be considered as part of the Toho group.

Fantastic, yes? Make sure and read the rest HERE – including what Frank Darabont brought to the script.
Equally fantastic is this interview from HUFFINGTON POST – in which Edwards confirms that this is indeed an origin story – and drives home the point that Godzilla will be the most attitude driven force of nature you’ve ever seen! Here’s a great snippet:

Your Godzilla looks like Godzilla, as opposed to Roland Emmerich’s Godzilla.

I mean, I think the design they came up with for Emmerich’s film is a cool design. It’s just not Godzilla. I am a great believer in that you should pursue all avenues, so we did hundreds of designs. Like, we just churned out the designs. And I was very lucky to have the best designers in the world. You’d call people and say, “Would you work on the film with us?” And they would say, “Aw, I’d like to, but I’m really busy.” And then you’d say, “It’s Godzilla,” and they’d go, “When do you need me?” 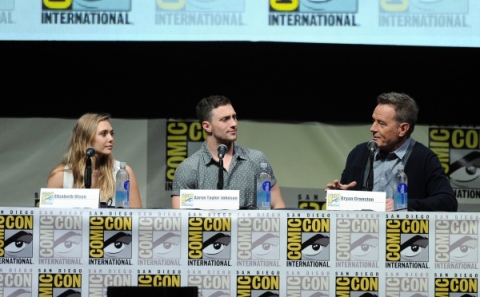 —————————————————————————————————-
Next up is a description of the panel and the footage that was revealed, courtesy of i09.com. For those who missed it – the footage included another kaiju – a beast that has been described as everything from a praying mantis to a mixture of the Cloverfield monster and a bug from Starship Troopers. I’ve been told that it was definitely armored, has spindley insect-like legs, and a thick beetle-esque carapace. I’d bet on this being a completely new creature, not a Toho staple. The beast is also absolutely dwarfed by Godzilla – who is absolutely HUGE. Here’s what i09 had to report:

Just now at San Diego Comic-Con, we saw the first proper footage of the Godzilla movie — and the absolute main impression we came away with was: HOLY SHIT IS GODZILLA BIG AND POWERFUL.

There was tons of shots of disasters and people running and human characters, and more of that in a second. But the centerpiece of the footage was a sequence where a big monster is attacking an airport, shredding airplanes and trashing buildings. It looks sort of like theCloverfield monster with a more of a beetle-like carapace and spindly insect legs. It looks massive and powerful.

Yesterday, director Gareth Edwards told us there would be other creatures in the film — and here’s our first sight of one. It looks scary and huge.

And then Godzilla’s foot comes down next to the creature. Godzilla’s FOOT. Which is dwarfing this poor spindly little creature.

And then there’s a massive hero shot of this previously big-looking creature looming over the airport, and then Godzilla rises up behind it, and it’s like a skyscraper next to a hut. Godzilla is this ginormous dark scaly beast with a gaping maw and a mighty screaming roar, and the crowd basically lost its shit. Host Chris Hardwick made a joke about people having to change their pants, and this seemed totally accurate.

Here we have an inside look at the Godzilla Encounter – some actual video footage of the incredible event Legendary put together for fans. Before you get too excited – no, they obviously did not get to record the actual Godzilla attack portion. The rest is definitely worth a look, though!

Finally, NECA announced that they will be producing Godzilla toys for the new film! Bloody Disgusting did an excellent job bringing this little nugget of joy forward – here’s what they had to say:

NECA revealed that, not only to they have Pacific Rim toys on shelves, but Legendary and Warners has granted them a license to create new Godzilla toys next summer!

The footage, as described at the above link, explains that there is another monster that battle the giant lizard. In theaters May 16, 2014, it looks like NECA could be delivering quite the assortment. More as it comes in, probably around next February’s Toy Fair in New York.

I’ll leave you guys with this interesting little rumor – which, if true, will change the entire way this film will be perceived. Nuke The Fridge claims to have an exclusive tip – and that tip would lead us to believe that Hedorah the Smog Monster will be in Legendary’s Godzilla. Can you IMAGINE!?

“Many reports have claimed that the plot for Legendary’s Godzilla film will revolve around the damage humans have caused to the earth’s environment. That being said if this peace of RUMOR turns out to be true it would make perfect sense. We call it a “rumor” until it’s confirmed. We just received a scoop that the main monster that Godzilla will battle in the reboot is Hedorah (ヘドラ, Hedora) also known as The Smog Monster.” – Nuke The Fridge

Exciting times are ahead! We’ll keep you updated as always.