UPDATE #2: Ladies and Gentlemen, we now have OFFICIAL CONFIRMATION from Legendary’s Godzilla Facebook page that the second trailer will hit TOMORROW – 2.25.14 10:00AM PST!

The truth has been awakened. #GODZILLA

UPDATE:  The news is up to a fever pitch, fans! Legendary just released an official press release containing their Godzilla’s trumpeting roar in all of its glory!

Here it is – BLARE IT!  Let us know what you think!

Well this came out of nowhere! Empire has come forth with a press release on their official site detailing one hell of a “subscribers” issue cover for April 2014 – And it features none other than our titular monster!

Looking an awful lot like his original Japanese counterpart, Legendary’s GODZILLA is striking a nostalgic pose amidst the Land of the Rising Sun. This, to me, is right up there with the new poster we just received from Yahoo Movies – Excellent piece of promo art! We;ve got the full resolution file and the official press release from Empire. Check them out below! 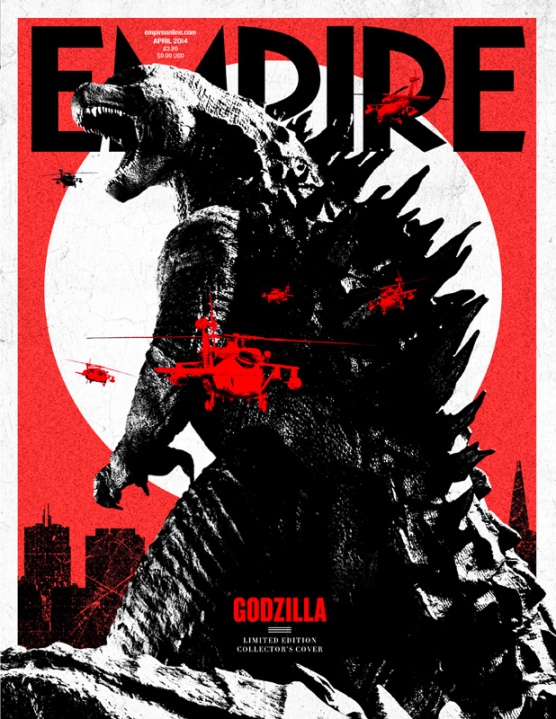 You know what’s cooler than our new Godzilla subscribers cover? No, we can’t think of anything either. Like a penguin in a blender, it’s black and white and red all over, and gives you some idea of the mayhem we can expect from Gareth Edward’s monster movie.

As you might guess from that Rising Sun-esque background, the film has one foot in Godzilla’s traditional Japanese stomping ground, but this monster has a passport and will travel – as those choppers might suggest.

The film boasts an accomplished human cast, including Bryan Cranston, Aaron Taylor-Johnson, Elizabeth Olsen and David Straithairn, but it’s the main man himself who required most care and attention from the director.

“Trying to get the face right was the main thing,” says Edwards. “I guess he’s got more of a bear’s face, or a dog’s. We also used eagle. There’s a lot of nobility in an eagle. It made him feel very majestic and noble.” Edwards also used London-based motion-capture facility The Imaginarium and its head, one Andy Serkis, on certain sequences to “control the souls” (as Edwards puts it) of his creations.

Godzilla hits screens on May 16, but you can pick up the new issue of Empire this Thursday (February 27) on newsstands. If you’re a subscriber, of course, you don’t have to worry about tracking one down on Thursday because you’ll get this dishy cover any day now. And as if that weren’t enough, keep your eyes peeled for more Godzilla goodness in the next few days…

This issue hits on my birthday, February 27th! Too cool, yes? I will of course keep you updated on all of their future reveals. You can check out their site update for the announcement HERE. In the meantime, SLASHfilm tweeted their approval of an early screening of the upcoming reboot – nothing but good things to say!

More to come very soon! Someone is going to have to pinch me in the midst of all this!