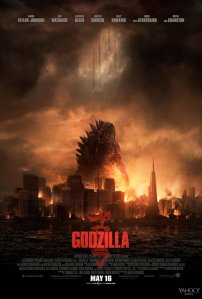 There are a few moments in life, if your a fan of something, where you get a shiver up your back because the thought crosses your mind, “I could be witnessing something historic here.” Its always exciting to witness a positive turning point with something you are passionate about. I believe that moment is now for kaiju fans.

Most of you by now have seen the trailer for the new Godzilla film. It seems that at long last a big budget American Godzilla film might be released that simultaneously pays respect to the history of the character, and also might redefine the genre in one fell swoop. Parts of the trailer are downright terrifying. Godzilla himself is portrayed as a coming apocalypse, a challenge to man’s dominance on our planet. Its rare we get to see the Big G in a role so downright scary and we should all be excited.

A trailer is far from an entire film I know, but if the film can recreate the tone of the trailer then we are in for one fun ride. It puts a smile on my face after all these years of daikaiju films being regulated to the b-movie shelf. We could be about to witness the turning point. Pacific Rim, as I’ve talked about at length, set the stage but the King himself is about to return and its been long overdue. So we fans get to enjoy this moment…that shiver of excitement that comes knowing that this might not only be a pinnacle of our lives as fans of this genre, but a catalyst to rejuvenate it as a whole.

Its like watching your favorite football team make it to the big game. Excitement overwhelms you, yet there’s the anxiety that comes along with it, knowing how difficult the road is to make it back should they fail. We saw this with Godzilla ’98 and it destroyed any hope of a big budget giant monster film stateside for over a decade (not including Kong but he’s a slightly different case). Given Godzilla’s declining ticket sales for his most recent outings in Japan as well, a failure here might essentially bury him for years to come. This is our one shot, all or nothing. 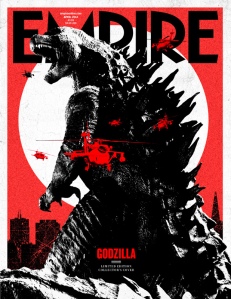 However we have so many reasons this time around to look forward in hope. From what we’ve been able to see so far it looks phenomenal from so many angles. No second rate actors. No cheesy summer blockbuster directors. So we look ahead, fingers crossed, that this film can help bring excitement back to a genre that so desperately needs it. And, hopefully, along with it an entire new generation of fans frothing at the mouth for more, and if were lucky, a bunch of high quality competition.

So we wait with baited breath, counting the seconds until he arrives. The turning point. The best chance we have to see a fandom we love so much revived and well once again.