Skip to content
The Passing of a Legend: Koichi Kawakita (1942-2014)
Toho History

Last night, we received confirmation that legendary Tokusatsu Special Effects Master, Director, and Actor Koichi Kawakita has passed. We give our best to his friends and family in this difficult time, and […]

Last night, we received confirmation that legendary Tokusatsu Special Effects Master, Director, and Actor Koichi Kawakita has passed. We give our best to his friends and family in this difficult time, and grieve with the fandom at large for such a huge loss. His presence will be missed, but his work long remembered. 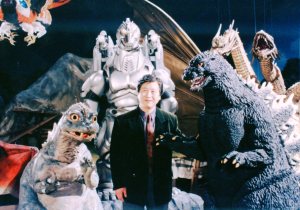 Kawakita’s involvement and influence over Tokusatsu and Kaiju Eiga at large began with many varied Showa era productions – but we will always remember him as the shaper of the Heisei era: An endlessly creative individual whose imagination gave birth to a new age of Godzilla and revitalized an entire film genre. I had the pleasure to meet Kawakita-San in person at this year’s (2014) G-Fest, as did many of my friends and colleagues. He was a very genuine and passionate man, and even through language barriers there was no questioning his love for the genre and our fandom. Even if the Heisei era of films is not your cup of tea, there is no denying the impact his unique sensibilities and artistry had on all of Kaiju Eiga going forward.

As we broke the news last night, Facebook was lighting up with tributes and memories of Kawakita’s influence on all our beloved films, and the fact that our post concerning his passing generated the most views and share’s we’ve had on social media since the reveal of Legendary’s Godzilla – truly speaks to the impact this man’s legacy has had on us all, and will leave behind.

Thank you for everything you’ve given us, Kawakita-San. We remember you fondly.