Jon D. B. via a SciFiJapan Exclusive Godzilla Resurgence has been all over the internet lately as Toho ramps up for the film’s release in July. The studio’s latest press is an exclusive […]

Jon D. B. via a SciFiJapan Exclusive Godzilla Resurgence has been all over the internet lately as Toho ramps up for the film’s release in July. The studio’s latest press is an exclusive set of Hi-Res images sent exclusively to the wonderful SciFiJapan – the kaiju fandom’s top source for news direct from the monster’s mouth. Toho has provided SFJ with a set of fantastic images (some new, some familiar) from the upcoming Resurgence (シン・ゴジラ, Shin Gojira), as well as a few tidbits we have not heard before:

Unlike all other films that have come before it in the franchise, Resurgence  will not be a sequel to any previous Godzilla film – not even the 1954 classic. While word-of-mouth and scoops had led the online community to believe this may be the case, Toho has confirmed with SciFiJapan that this is not so. It may have been very interesting to see the ‘resurgence’ of Shodaigoji, but we’ve seen that before – albeit in very abstract ways. Now we can prepare ourselves for something completely fresh and new. “Fresh, different, and new” may not be at all what some fans were hoping for, but let’s face it: If there’s one thing the Godzilla franchise has always consistently been – it’s inconsistent.

With that in mind, we’re heading toward what looks to be a very modern take on a very ancient ideal, one that will tote global involvement & an unprecedented catastrophe. Said catastrophe, or the Big G as we know him, is set to be unprecedented indeed – or absolutely enormous, to be more specific: 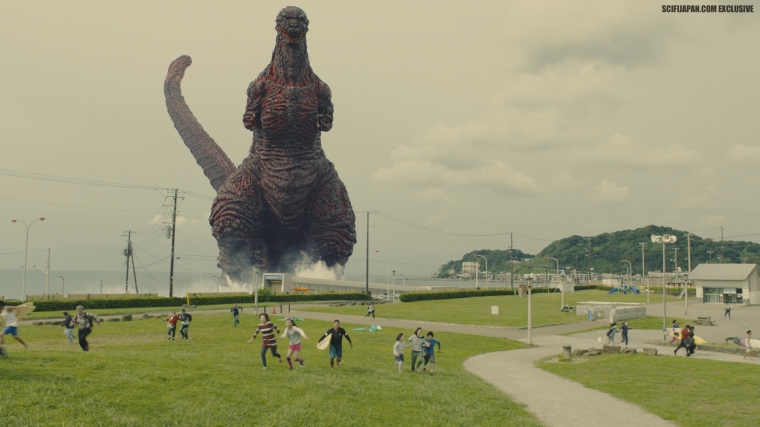 These exclusive images (above and beginning of article) show us two things. We’ve known Shin-Gojira was going to be the largest G on record for a while now, but seeing that in context really displays the absurdity of his stature. Enormous doesn’t even do him justice – he’s gigantimous. Another wonderful attribute to note (as we have previously) is how classic some of these images seem. Godzilla himself may be almost unrecognizable, but his huge presence lumbering over a wide-set landscape shot is certainly not. We’ve seen this sort of cinematography in almost every film since 1954. It is also interesting to note, that much like the ’54 incarnation, Shin-Gojira seems very static. He may be a stoic creature to begin with, but we haven’t exactly seen a lot of dynamic posing for the King of the Monsters associated with this film, that’s for sure. It’s unknown if Toho has sequels in mind or plans to have him do battle with any other kaiju in the future, but if they do they might want to loosen him up a bit…

Familiar cinematography aside – some images sent to SciFiJapan may seem a bit more foreign. Each displays key cast members for the film in a distinctly clean, modern way that will undoubtedly set this film apart from its predecessors. To view the rest of the images (including shots of the cast & a hi-res poster) and a full cast/crew list, please visit SciFiJapan’s original article.

July is set to be an amazing month for G-Fans, and we’re ready to soak it all in. Godzilla Resurgence hits theaters July 29th, 2016 – and the fandom’s premiere convention,G-FEST XXIII will be held from July 15th to July 17th, at the Crowne Plaza Chicago O’Hare. We’ll be there to celebrate all things Resurgence, and want to help you do the same!

Skreeonk.com has released a set of exclusive T-Shirts for 2016 featuring Shin-Gojira and some old friends, which will be available for a limited time. You can purchase your own limited-edition “The Good, The Bad, and The Ugly” T-Shirt via TeePublic right here for only $14 a pop! There’s a ton of color options available, and three sets of exclusive artwork by Skreeonk.com – all featuring Godzilla 1975 (The Good), GMK Godzilla (The Bad), and Shin-Gojira (The Ugly):

Click the image above or THIS LINK HERE to purchase a shirt of your own. As always, we’ll keep you updated with all things Godzilla Resurgence. Thanks again to SciFiJapan for their original exclusive and for providing so much to the fandom.