The THING!? Mothra would be offended! I just finished watching Mothra vs Godzilla, one of my favorite movies. MvsG is the fourth entry in the Showa series (released in 1964) […]

The THING!? Mothra would be offended!

I just finished watching Mothra vs Godzilla, one of my favorite movies. MvsG is the fourth entry in the Showa series (released in 1964) and easily one of it’s best. The storyline is engaging and the Monster effects are just plain golden.

We find ourselves in the midst of a massive tsunami on the Japanese coast. The skies are dark – debris is everywhere… no signs of human life. As the darkened, angry sky calms – a massive, brightly colored Egg appears just off the battered coast. Its a Monster Egg… And it belongs to Mothra.

Meet our heroes, reporter Ichiro Sakai (Akira Takarada) and his photographer/lady friend Junko Nakanishi (Yuriko Hoshi). They’ve just arrived on the scene to take pictures of the tsunami wreckage – Little do they know that one of the largest scientific discoveries of the decade awaits them, just off shore. Later in the day – the monster egg is brought ashore by locals hoping to make a profit – but they are doomed to swindelry by the notorious business weasel, Kumayama (Yoshifumi Tajima). Kumayama is a self pronounced ‘entrepreneur extraordinaire’ who will do anything to make a buck – and he’s just ‘bought’ the gigantic egg. The weasling windbag urges Ichiro and Junke to buzz off – and in Ichiro’s further quest for Egg answers we meet Professor Miura (played by Japanese veteran actor Hiroshi Koizumi). Miura is at first very cold to the reporters and is only interested in studying the egg. Eventually, he befriends our heroes – and the plot really takes off here.

To make a long story short, Kumayama and his boss Shiro Torahata (Kenji Sahara), the guy pulling all of the strings, attempt to extort the giant egg by placing it in an amusement park type setting where the public can “pay a small fee” to observe the natural wonder. The dubious duo is visited by the Shobijin (known here in the states as “those two tiny echo-ey girls that always show up wherever Mothra is”) and are warned that they must return the egg to its home, or they face great danger. Seeing another business oppertunity in the miniature girls, Kumayama and Shiro try to trap the Shobijin, but to no avail. The little girls then visit Ishiro, Junko, and the Professor outside of Shiro’s moneyfilled headquarters to make a plee to them for help. Through the Shobijin, we learn that the egg belongs to Mothra, a giant moth ‘god’ from Monster Island – and if the egg is not returned, Mothra’s children will burst forth in search of food – causing great damage to Japan.

Kumayama and Shiro’s greed will ultimately cost them their life – the egg and its radiation attract Godzilla, who surfaces and begins to wreak havok upon heavily populated cities. The militaries of both Japan and the United States are helpless against the might of Godzilla, and Mothra is Japan’s only hope. Our heroes travel to Monster Island to beg the native people and the Shobijin for help – But Mothra will not be easily persuaded. She is dying.

After a heartfelt plee from Junko, our heroes depart with the blessings of the Shobijin as Mothra flies to Japan to attack Godzilla. The battle ensues as Godzilla destroy’s the gigantic egg incubator, but just as Mothra seems victorious, Godzilla delivers a KO with his atomic breath, sending Mothra to her grave. Her massive, majestic body floats into the mountainside. Just then, her egg begins to rumble and glow as not one – but two Mothra Larvae burst forth. The moth god of monster island is born again. The double threat takes on Godzilla, eventually wrapping him in a monstrous cocoon and saving the day. Our heroes, and all of Japan – are safe once more.

The original japanese title for the film is MOSURA TAI GOJIRA (much prettier, if you ask me) and was met with a fantastic opening (apparently sold over 3 1/2 million tickets in Japan). MvsG’s US release was a rarity in that the footage itself stayed mostly intact – and the storyline was barely tampered with. Most Godzilla movies that made it to the states were heavily butchered and rewritten – the original masterpiece GOJIRA being an excellent example (the US release Godzilla: King of the Monsters was about 50% original anti-nuclear epic and 50% Raymond Burr monster movie). However, for MvsG, only a few unimportant scenes were cut out and one was actually added back in – The original Japanese release cut out the memorable scene featuring a US missile attack against Godzilla on the Japanese shore. Even though it had been twenty years since the end of WWII, the apocalyptic events were still far too fresh on the minds of the Japanese public – and TOHO thought it best to leave out a scene featuring US missiles hitting Japanese soil. Yet the US release did feature some changes – but they all came within the ad campaign. MvsG was marketed (and is still known widely today) as GODZILLA vs THE THING – The Thing being Mothra. In the posters and advertisements, the movie was marketed with Godzilla pitted against a hideous beast – sometimes hinted at having tentacles and fangs. Mothra’s appearance was kept secret from american audiences – and once the film was released, people were deeply confused. The confusion is still egged on today (no pun intended), as in most US dubbed versions of the film, Mothra is still referred to several times as ‘The Thing’… quite unfitting for such an elegant and feminine monster.

MOTHRA vs GODZILLA features several memorable characters. Professor Miura, thoughtfully performed by veteran Japanese actor Hiroshi Koizumi, stands out as one of the more interesting and deeply invested heroes. Koizumi, to the delight of many fans, actually reprised this role nearly forty years later in GODZILLA: TOKYO SOS (2003), which directly deals with Mothra and the events that take place in MvsG. But the real show stealer is Yu Fujiki, who plays loveable reporter Jiro Nakamura – the guy constantly eating eggs. Yu is a true delight, and gives us the film’s most memorable lines (such as “I’m more afraid of the Editor than Godzilla – He’s meaner”). 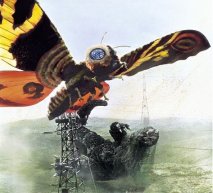 Given the strong nature of the story line and main characters – the Godzilla scenes in comparison are a bit bland. Usually, all scenes featuring the towering behemoth are the highlights of his movies, but Godzilla’s just not given too much to work with here. The military scenes aren’t as inventive as usual (even with the inclusion of a gigantic electric device meant to electrocute Godzilla) but hold their own none the less. He does however have a tussle with a giant tower that his tail gets stuck in – pretty amusing. The battle scenes between Godzilla and Mothra, however, are classic and fast paced. The larvae twins deliver one of my favorite Godzilla sequences in which they wrap him in a massive cocoon, saving the day. They are quite ugly as babies… but the Mothra ‘prop’ however, is stunning. It is beautiful yet dark and godlike all at the same time. And any fan will be quick to tell you that the Godzilla suit featured in this film and this film alone (affectionately referred to as MosuGoji) is one of the most unique and appealing of all. Godzilla’s distinct, wabbly cheeks (rumored to be an accident that legendary director Ishiro Honda decided to keep) give him character – but his somber, constantly frowning glass eyes give this incarnation of Godzilla a mean, lean look that helps sell his wave of destruction. The suit would be used again in the next Godzilla film, Ghidorah The Three Headed Monster, but with an altered head design.

MOTHRA vs GODZILLA features one of the best stories of the Showa era, and two of the worlds most well known monsters. These two elements combined with a solid cast and efficient monster action earn this classic a score of 4 out of 5 -definitely a film that even those out of the fandom can enjoy!

If I had to describe Mothra vs. Godzilla in one word? Solid. This movie receives a lot of praise, and is often named as the best of the series and the favorite of many fans. I myself am not among those fans, but I can clearly see why they love the film so. I’m not huge on it, but it’s quality is undeniable. The story, the effects, and the music- everything is great all around. If there’s one thing I truly admire about this flick, it’s that it has withstood the test of time so well. I can safely watch this movie knowing I won’t be disappointed. It’s an oldie, and a first-class goldie.

This is an all-around solid movie, and well worth the time of any G-fan. If you haven’t already, be sure to check it out. – HayesAJones

Quite possibly the best entry of the Showa series of Godzilla films. This movie has one of the most sound and interesting stories of them all. The sense of urgency in this movie just sort of jumps out at you, and you become attached to the characters quite easily. Godzilla is the bad guy again, and his sinister new look capitalizes on that theme. He is depicted as an unstoppable force of nature with no motives to speak of. Mothra, on the contrary, is now a good guy, and her emotions are portrayed just as well as the humans. Mothra pitting herself against a seemingly over matched foe to protect her egg is sheer poetry, and the battle is on of the most creative in the series. The military involvement in this film is the best of the series, with the military coming up with several thought-out plans, instead of just showing up and firing away. The musical score, while repetitive at times, is again one of the best of this era. A solid four and-a-half stars, if not a perfect five.

Mothra vs. Godzilla (1964) is the pinnacle, I think, of what Toho was doing back in the day on a technical level. Everything in this film is top notch. The acting, directing, writing, everything. Tsuburaya’s effects rival what was being done in Hollywood at the time. Godzilla appears (in an awesome way I should mention) about half way through the film but you don’t even notice because you’re wrapped up in the human characters. It’s a shame some loathe the film for Godzilla defeat at the hands (or sticky web spray) of two newborn caterpillars!

[Review - swipe for official hi-res stills]
TOMORROW, we join the rest of the world in seeing GODZILLA VS KONG! What a wait it's been.
Now THAT'S a poster! LEGENDARY just shared an updated version of the latest GODZILLA VS KONG poster with less text, and it's a banger.
Gameplay shots of all three new mobile #Godzilla games are now live on Skreeonk.com - courtesy of our friends at TOHO Games!
MORE ON SKREEONK.COM - Get your EXCLUSIVE First Look Inside ‘Godzilla vs Kong’ Prequel Graphic Novels: ‘Godzilla Dominion’ and ‘Kingdom Kong’!
GODZILLA vs KONG OFFICIAL POSTER GALLERY! Whether you’re #TeamGodzilla or #TeamKong, get ready to highlight the hype with Skreeonk.com’s Godzilla vs Kong Poster Gallery!