“We will create soldiers that never die. Behold – Frankenstein’s still beating heart!” The following is KFN Expert KaijuDuke’s review of the original Japanese version of this bizzare and unique […]

The following is KFN Expert KaijuDuke’s review of the original Japanese version of this bizzare and unique cult classic, followed by The Real McCoy‘s analysis: 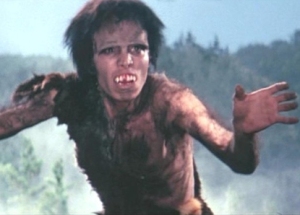 A strange and unique entry in the Toho film series, but in a good way! The film tells the tale of how the remains of the famous Frankenstein Monster grow into a new, neanderthal like creature who goes from being the size of a mere boy to that of a city stomping giant amazingly quickly. A sympathetic creature despite some of his more beastly attributes, the Frankenstein Monster finds himself subjected to the ambitions of curious scientists and is tragically framed for a series of murders and disasters caused by yet another monster, the subterranean dinosaur Baragon!

You wouldn’t think a movie about a jumbo sized Frankenstein Monster and a fire breathing, burrowing dinosaur would work out, but it does, and ya find yourself looking forward to the appearances of both kaiju throughout the course of the film. Frankenstein and Baragon are smaller than most other Toho Kaiju, but in a way that makes things more interesting, such as scenes in which Frankie hides in the woods from human eyes or when Baragon emerges to ravage a country farm for its livestock. And the final battle between the two monsters? Not to be missed!

Though this is Frankie’s only appearance in Toho’s series of films, he leaves an impression on you with his hairy caveman like looks (being portrayed by a human in makeup rather than a suit), and sets the stage for the sequel, “War of the Gargantuas.” As for Baragon, he is certainly one of Toho’s most unique looking and underrated creatures, hosting an array of abilities from burrowing, fire breathing, and a glowing nasal horn that lights his way while tunneling in the dark. Unlike Frankie, Baragon would return to the big screen in “Destroy All Monsters” as a cameo character, and would bravely challenge the King of All Monsters himself in “Godzilla, Mothra, and King Ghidorah: Giant Monsters All Out Attack,” minus his bio-luminescent horn and heat ray unfortunately.

The human characters are engaging as well, particularly the science team who raise Frankenstein and seek to protect the monster, some for more morally questionable reasons than others, as well as uncover the truth behind the mysterious attacks on the Japanese countryside. If you’re looking for a good time and an imaginative storyline with badass monsters to boot, “Frankenstein Conquers The World” will sure to please you! 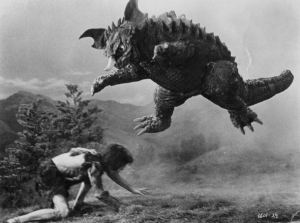 Frankenstein Conquers The World, or Frankenstein vs. Baragon is a relatively underrated film. However, the final product is quite worth all the praise it gets. The story is hard not to be interested in, as it uses elements both from actual events (the bombing of Hiroshima), and from other existing media (the story of Frankenstein). The idea of a heart that grows into a human just begs to be elaborated on. Now, onto the story. From the first time Frankenstein appears; a young homeless boy wandering the streets, the viewer begins to feel sympathy for the character. The stories told of a boy growing up in the radioactive ruins after the bombing of Hiroshima is quite intriguing. As Frankenstein ages, he begins to grow to an enormous size and is kept in a cage. After his escape, due to the actions of some unruly reporters, he goes to say goodbye to one of his keepers, Dr. Togami (Kumi Mizuno), and the audience’s feelings for him grow stronger, knowing that he’ll be viewed as nothing more than a dangerous monster-on-the-loose. Enter the monster Baragon, who causes more trouble than Frankenstein; hunting the same food, but also killing humans. Frankenstein is blamed for the incidents, due to Baragon being a subterranean monster and therefore virtually invisible. Once again, the audience knows that Frankenstein is innocent, but is doomed. The confrontation between the two monsters is exciting, with Frankenstein eventually defeating Baragon, and only as he faces death do the people realize that he is innocent.

The human side of the story is a very enjoyable adventure, with a solid cast filled by some talented Toho actors. The first I will mention is Dr. James Bowen, played by Nick Adams. My favorite American actor in the Toho films I have seen (even more than Don Frye), he plays his part with enthusiasm. Next is Sueko Togami, played by Kumi Mizuno. She knows that Frankenstein will be killed, but never gives up at clearing his name. Her onscreen chemistry with Nick Adams is exceptional, much the same as it was in the film Invasion of Astro Monster, the Godzilla film of that same year. The last actor I will mention is Yuzo Kawaji, played by Tadao Takashima. His character, the scientist who wants badly to study Frankenstein, but doesn’t want to sacrifice him is pulled off nicely. Towards the end, his judgment sways toward the latter, but is returned to the former when Frankenstein saves his life.

Once again, another “monstrously” enjoyable nighttime flick (ha-ha), and much better story-wise than its successor, War of the Gargantuas of the next year, but that’s another review for later! I give this one four and-a-half stars out of five.

A great, but extremely under appreciated and overlooked Toho fantasy film. One might say that the process that went into the film’s conception alone is as equally intriguing as the picture itself.

This is my personal favourite non-Godzilla Toho giant monster film. There really isn’t anything I don’t like about it. I love the World War II opening, the emphasis on post-Hiroshima/Nagasaki life in Japan, and that a giant caveboy battles an underground dinosaur. Nick Adams and Kumi Mizuno make a cute couple too. There’s just a pulp vibe to it that I can’t resist. – T. Beasley