“Attack of the Space Squid!” KFN’s Showa Gamera expert The Real McCoy weighs in on the fourth entry to Daiei’s original series: Ok, here is where things start to get […]

“Attack of the Space Squid!”

Ok, here is where things start to get a little…wonky. This time out, we bring in the invaders from space, which from here on out would be the most popular theme in the Showa Gamera series. Gamera faces off against a giant…squid. A creature with tentacles, a parrot-like beak and a pointed head that splits into four lobes; the purpose of which is not clear, but the monster begins with the lobes relaxed, and only brings them together when preparing to use his head as a weapon. Gamera’s appearance doesn’t change, so nothing new there. As I’ve stated in previous reviews, these movies are noted for having laughable special effects, and this is no exception. The spaceship, piloted by humanoid life forms and directed by a computer, looks like four or five balls placed around a ring of some sort, painted with black and yellow stripes. But aside from that, there aren’t that many “eyesore” effects in this movie, unless you want to get seriously nitpicky. The “Super Catch Ray”, the weapon that the aliens use to subdue Gamera and the two boys is quite goofy, but the rest isn’t too bad.

Part of the reason this movie stands out for me is that there is plenty of Gamera action. Unlike the previous films, he is a bigger part of the story. He shows up at the very start of the movie and repels the first alien attack, and then a little later, he appears again and basically sticks around for the rest of the movie. He is put under alien control, and only through the help of the boys does he manage to break free from the mind-control device and come to the rescue.

The humans in this film are mediocre, but not bad. The two main protagonists, Masao and Jim, are two boy-scouts on a camping trip. These two are less annoying than future child actors in this series. They are pranksters, and their fun leads them to be captured by the aliens. The rest of the characters are not really memorable; save for the scoutmaster, played by Kojiro Hongo, a lead from the previous two films. Weird science makes another appearance here, as Masao and Jim sabotage the mini-sub to play a joke on the doctor. They switch the battery cables from positive to negative (which would fry every fuse and circuit in the sub), and use the same technique to save Gamera and escape from the spaceship.

This film is the first in the series to make extensive use of stock footage. As Gamera is placed under the alien’s control, they probe his mind to discover his weakness; an over-powering affection for human children (which further solidifies the direction the franchise was taking), using a several-minute cut scene of the three previous movies. It also features the annoying new theme song for Gamera. The movie isn’t as gory as the previous movie, but there is a gruesome scene in which Gamera gets stabbed in the belly by Viras, leaving a rather large hole in his chest. I always wondered why movies intended for children would have that kind of violence in it. Not that I disapprove, it’s just odd. From a critical view, this movie would probably get at most a three-star rating, but I’m giving it three and-a-half, because I enjoyed it.

Just a little trivia: Several of these movies featured American child actors. What is interesting about it is that all of them speak Japanese, and are not dubbed over. I thought they were, but upon multiple viewings I realized that the lip movements did not match the English subtitles, which meant they were speaking Japanese! I’m pretty sure most of you know that already, but I recently discovered it and felt the need to share it! – The Real McCoy 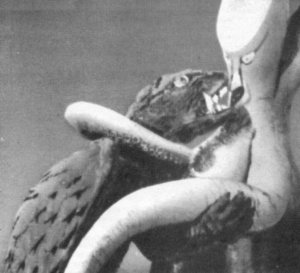 This is…a bad movie. The whole plot revolves around aliens traveling in giant honeycombs with their cuddlefish-squid-spear monster. As the movie progresses, our two happy-go-lucky Boy Scout protagonist actually infiltrate the alien ship. It’s incredibly yellow in there (but I may blame my St. Clair 12-pack box set for that problem). The issue with this movie is that Gamera and Viras really aren’t too bad of a factor in the movie. There’s the monotonous aliens, the previously mentioned scouts, and that’s it. Not only do the monsters get a small amount of screen time, but they’re fight is goofy and downright unsatisfying. Viras lacks any sort of power (outside of drilling himself into his opponent, which is idiotic, but I digress), which really leaves most viewers eating more.

Another problem I noticed when I watched it a couple months ago was the segment of stock footage. It lasts around fifteen minutes, which is a good chunk of time in this somewhat short movie. It shows the previous two battles Gamera has been in (against Barugon and Gyaos), but it isn’t courteous enough to edit it down to a minute or two. It’s faintly familiar to how All Monsters Attack is, except this time the footage seems out of place and unnecessary.

Final thoughts? If you have to pick and choose between Gamera movies, stick with War of the Monsters and Gamera vs Gyaos. This movie may be the worst of the whole Gamera series, and with good reason. However, if you want a good laugh at a couple short-short-wearing Boy Scouts going against a race of aliens, this is the movie for you.

A half eaten squid tentacle out of a possible five for this ’68 flick. – King Caesar