“All creatures of the ocean fear his mighty cry. He is EBIRAH, Horror Of The Deep!” Godzilla vs The Sea Monster is a very fun adventure film. Definitley something different from […]

“All creatures of the ocean fear his mighty cry. He is EBIRAH, Horror Of The Deep!” 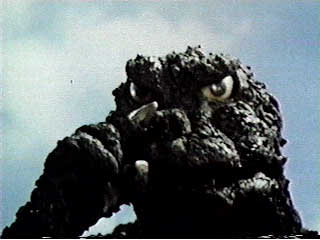 Godzilla vs The Sea Monster is a very fun adventure film. Definitley something different from most other Godzilla movies. The plot is much more human-driven, but that’s quite all right, as the story is an interesting (but definitley cliched) one. The protagonists are a ragtag group of different characters with different backgrounds. There’s the ambitious young man searching for his missing brother, his personality-less brother, two goofy characters (one goofier than the other), the badass dude with experience and a dark past, and the hot, skimpy islander girl (and I mean HOT). It’s fun seeing them work together, doing some of the most simplest of plans to dupe/get away from the antagonists. Nothing heavy in characterization, but it’s that simplicity I enjoyed.

What do these guys have in common? They’re all stuck on a distant island that happens to belong to an evil terrorist organization called The Red Bamboo. What’s keeping these guys from getting off the island? A gigantic monster shrimp known as Ebirah, “The Sea Monster”.

Some people would laugh at a giant shrimp. I mean, c’mon, It’s a giant SHRIMP. But I personally liked his excellent design. Of course, other than that, he’s got nothing special. Ebirah is pretty much just The Red Bamboo’s guard dog, and not much else. The even more random (and unexpected) Giant Condor also serves the same purpose, but only shows up for a single scene for the whole movie. Mothra looks great in this film, but her role is only to be the ultimate saving grace for our brave heroes. Still, it’s cool seeing her wisk everyone off the isle (one of the few times a monster directly interacts with humans). Godzilla takes up a big spot of the film, showing off plenty of fighting amd destroying. All he does is fight Ebirah and The Red Bamboo’s other forces, though, which is atleast entertaining to see.

A fun film to watch. Something great and exciting for kids, and simple enough for adults to watch on a lazy sunday morning … oh, and don’t forget Daiyo … DAIYO. Daiyo, man … she’s Daiyo!