Godzilla and Mothra: Battle for Earth (1992)

Mothra’s Legend Retold – Godzilla and his Mightiest Foil Clash once again. The fourth entry in the Heisei era Godzilla series, “Godzilla and Mothra: Battle for the Earth” would become […] 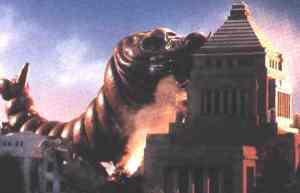 The fourth entry in the Heisei era Godzilla series, “Godzilla and Mothra: Battle for the Earth” would become the most commercially successful Goji film ever, a fact I find mind boggling since the film focuses more on Mothra than Godzilla, and I don’t consider it to be the best entry in the series. The story is a loose retelling of the original 1964 “Mothra Vs Godzilla,” only with a modified plot and the addition of a new monster, Battra, a dark twin of sorts to Mothra. It starts with a meteorite falling to earth, setting off a series of environmental disasters across the planet – awakening Godzilla and Battra, and unearthing a strange object on faraway Infant Island. A joint expedition headed by the Japanese government’s Environmental Planning Bureau and the Marutomo company is sent to the island to investigate, soon learning that the strange object is in fact Mothra’s egg, under the protection of twin fairies calling themselves the Cosmos, responsible for keeping the earth in balance. What follows is a story detailing a three way struggle between Godzilla, Mothra, and Battra for the fate of the earth, with the folly and greed of humanity fueling their struggle.

Despite his sparse appearances during this film, Godzilla looks as impressive as ever, the BatoGoji suit built for this film is more or less identical to the previous BioGoji/GhidoGoji suit only slightly smaller and with minor changes made to the face. Both adult and larval form Mothra look much more realistic than her previous Showa era incarnations, but the hair covering the imago form’s body looks a bit too much like fuzz rather than natural fur, and the legs are far too short (fans would have to wait until the Millennium series before seeing a truly gorgeous and life like Mothra unfortunately). However, Mothra’s new array of offensive and defensive abilities make it easier to take her seriously as a rival to Godzilla, unlike her earlier portrayals who despite always putting up a good fight, were ultimately unable to truly pose a threat to the Big G (I won’t spoil her new skill set for you though, that’s half the fun of the film’s final battle). Her new powers also add to her sense of mysticism as a guardian deity of the earth rather than just a jumbo sized bug. Then there is Battra, who is actually more realistic and better made than Mothra in both his larval stage and final adult form. Battra makes the movie, being portrayed not as an evil kaiju per-say, but rather an anti-hero seeking to defend the earth against humanity’s greed and Godzilla’s might alike, but who’s methods are more extreme and destructive than Mothra’s, thus bringing the two guardians into conflict with one another despite having the same goal. However, Battra’s adult form’s arsenal, while still imposing, appears somewhat lacking compared to Mothra’s despite the film portraying him as her oldest nemesis, so I think they should have either given him more to work with or cut down on some of her powers.

The environmental awareness aspect of the plot, while important to the story, is laid on a bit thick at times and the Cosmos, who talk in sync just as their Showa era counterparts do, can grate on your nerves. However, the idea of the Cosmos being supernatural beings who safeguard the earth against possible threats was a nice touch, even if they look like little ballerinas in their awful pink outfits. However, when the Cosmos sing the classic song to summon Mothra, you forget about their flaws and enjoy their beautiful singing voices. The other musical scores were great as well, Godzilla rampaging to his own classic theme and the music played for the fight sequences were quite epic. The only memorable human characters are Masako from the EPB and Takuya, her tomb raiding ex-husband, though fans of the Heisei series will recognize Secretary Ruzo Dobashi from “Godzilla vs King Ghidorah” and fan favorite Miki Saegusa, though her role is pretty small in the film unfortunately.

At any rate, while I don’t agree with the hype this film has enjoyed, I do consider it to be a decent entry in the franchise and a must see if you intend to watch the entire Heisei Godzilla series from beginning to end, or if you happen to be a big fan of Mothra rather than Godzilla.