Godzilla’s family is expanding. And not in a good way. Godzilla vs SpaceGodzilla” is the sixth entry in the Heisei era Godzilla films, and is an entertaining entry to be […]

Godzilla’s family is expanding. And not in a good way.

Godzilla vs SpaceGodzilla” is the sixth entry in the Heisei era Godzilla films, and is an entertaining entry to be sure, featuring a sizable cast of kaiju and an imaginative storyline that ties into the rest of the Heisei series rather well. This time around the United Nations Godzilla Countermeasures Center (UNGCC) has put into motion two plans to counter the threat of Godzilla after Super MechaGodzilla’s defeat in the previous movie, Project M, AKA Project M.O.G.U.E.R.A., and Project

T, AKA Project Telepathy. Project M involves pitting Godzilla against M.O.G.U.E.R.A., G-Force’s latest anti-monster weapon, whereas Project T involves taming Godzilla via a device that amplifies the telepathic powers of human psychics, such as those of everyone’s favorite esper, Miki Saegusa. Miki ends up accompanying a team of scientists and G-Force soldiers to Birth Island, home to Godzilla and his young son Little Godzilla, to put Project T into effect, though things become tense due to the presence of Yuki, another G-Force operative who’s been living on the island seeking to slay Godzilla. Yuki’s best friend was killed by the Big G back in the 1980s during the events of “Godzilla vs Biollante,” desiring vengeance on Godzilla. And as if that wasn’t enough, Miki is informed by Mothra’s fairies that a new monster has been spawned by G-Cells carried into outer space (I’ll let you see the film to hear the theories on how this happened, they tie in well with “Godzilla vs Biollante” and “Godzilla and Mothra: Battle for the Earth”). The resulting fusion of Goji’s own flesh and blood with alien organisms and cosmic radiation results in the birth of the aptly named, Space Godzilla. This alien doppelganger is intent on invading earth and replacing the original Godzilla as King of the Monsters! 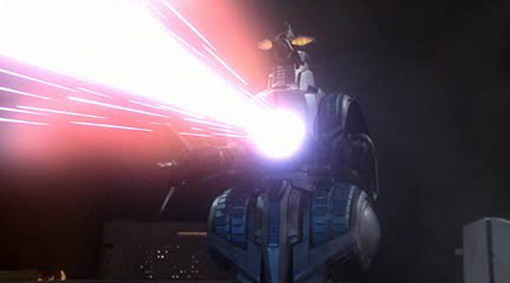 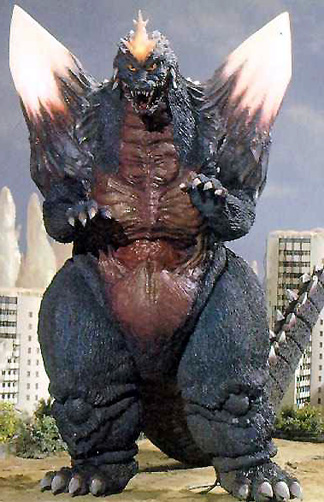 If that doesn’t sound like a formula for an all out sci-fi fantasy adventure, I don’t know what does. Godzilla looks the same as he did in “Godzilla vs MechaGodzilla II” but continues to impress, whether it be defending his son from SpaceGodzilla’s brutality or stomping through a city in search of his evil alien clone. Also, the suit, nicknamed “MogeGoji,” was the first Godzilla suit to have a head that could move from side to side instead of just up and down, making Godzilla seem much more lifelike. “MogeGoji” also possessed a ventilation system to help keep the actor cool while inside. Little Godzilla, the larger, elder form of Baby Godzilla from the previous film, is not only cuter than his Showa era counterpart Minya, but also bears a stronger resemblance to his dear old dad, i.e. you can tell he’s a young Godzilla at a glance. Little G is adorable and playful like Minya was, but is decidedly less cheesy looking, a welcome update to the son of Godzilla topped only by his “teenage” form Godzilla Junior in the sequel, “Godzilla vs Destroyer.”

While the idea of a monster created from Godzilla’s own DNA had already been done in “Godzilla vs Biollante,” SpaceGodzilla is still a shocking creature to behold, a twisted fusion of Godzilla and strange crystalline alien life-forms, easily one of Godzilla’s strongest enemies ever, even when compared to the likes of King Ghidorah and MechaGodzilla. SpaceGodzilla is also a monster who can be considered truly evil rather than just aggressive, deliberately seeking out Godzilla to defeat him and arrogantly letting him live after doing so, as if to prove a point that he’s no match for him. And to add insult to injury, Space G cruelly locks

Little G up in a crystalline prison, practically begging the real Godzilla to seek him out for round two. Space G is a monster you will love to hate, a genuine villain kaiju who’s extraterrestrial origins serve as a tribute to the horde of space kaiju pitted against Godzilla during the 60s and 70s. G-Force’s new monster mashing weapon, M.O.G.U.E.R.A., short for Mobile Operation Godzilla Universal Expert Robot Aero-type, is a revamp of the classic Showa era robot Moguera from “The Mysterians.” M.O.G.U.E.R.A.’s impressive array of advanced weaponry and unique appearance makes him an appropriate successor to Mechagodzilla, and keeps the human cast right smack in the middle of the action. Mog’s ability to divide into two separate attack vehicles, Star Falcon and Land Moguera, is of special interest, though the airborn Star Falcon doesn’t seem very aerodynamic (to be fair, making a bulky pair of robot legs and hips into a passable airship can’t be easy). Needless to say, the fight scenes are intense and feature alot of explosive special effects and even some melee moments for those of you who favor tooth and claw battles over beams and missiles.

Now, as for the acting, Megumi Odaka does a bang up job as Miki Saegusa once again, firmly believing there is a way for humanity to survive without coming into conflict with Godzilla, unlike Yuki, who’s character comes across as a Japanese Captain Ahab, his determination to avenge his friend coming across as admirable at times and at others just plain delusional and obsessed, making him easily one of the more memorable human characters from the Heisei era besides Miki. Miki even has a new love interest in the form of Project M pilot Koji, who unlike Miki shares Yuki’s belief that Godzilla must be destroyed, making his pursuit of Goji sympathizer Miki difficult. Akira Nakao returns again as General Aso, the recurring head of G-Force who gets a bit more character development this time due to his past as Yuki’s commanding officer. All and all, the drama between characters is more than you would expect from a kaiju film and makes the non-monster scenes more interesting. The music is stunning as well, each of the monsters having their own theme, Godzilla’s and SpaceGodzilla’s being especially memorable. 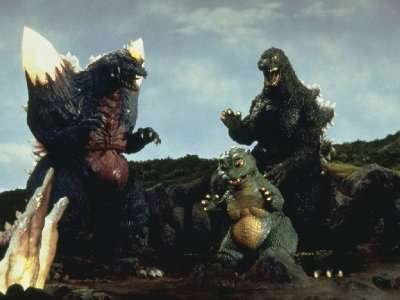 The only real flaws with this film are a few scenes here and there, such as the short lived dogfight between SpaceGodzilla and M.O.G.U.E.R.A., the asteroids they fought amongst looking rather fake for a film made during the 90s. Also, in a scene where SpaceGodzilla demonstrates his levitation abilities against Godzilla, Goji’s movements seem a bit stiff, not really putting up much of a struggle. Last but not least, there is a thankfully brief ocean scene in which the tip of Goji’s tail seems to be hanging by a thread as it splashes up and down in the water, the old “RadoGoji” suit used for the film’s water scenes not being waterproof unfortunately (you won’t notice it unless you’re looking for it though). However, none of these flaws ruin the film, so I highly recommend it to fans of big bad monster battles as well as heaps of kaiju and human character drama, I give it a four out of five.

Happy #Ultraman Day!
GODZILLA SINGULAR POINT will hit Netflix for streaming in the U.S. on June 24, 2021!
Now here's a phenomenal Mechagodzilla design! Would you have preferred this version in the film?
If you aren't already excited for @insighteditions GODZILLA VS KONG concept art book, then you should be for the #DOUG concept art alone!
SAVE THE EARTH! Happy Earth Day, kaiju fans!
China is celebrating GODZILLA VS KONG's success with this absolutely stellar new #MonsterVerse poster!