Kyle Chandler To Reunite With Giants in GODZILLA: KING OF THE MONSTERS!

Variety reported exclusively Tuesday evening that Netflix’s Bloodline star, Kyle Chandler, will be joining fellow Netflix breakout star Millie Bobby Brown (Stranger Things) for G:KOTM. Chandler is best known for his turn in Friday Night Lights and is a phenomenal actor. He will play Brown’s father in the sequel. UPDATE: Since this article was published, we reached out to Legendary to confirm whether or not the title includes “The”. We’ve confirmed it does, so this article has been updated accordingly. Please excuse the graphic above, as we will be using G:KOTM from now on. For the full report on this, visit the published article here. Thanks! 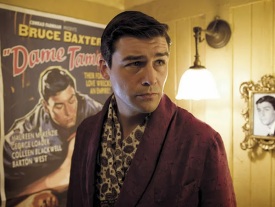 This is, however, far from his first foray into giant-monster territory. As many fans of the genre remember, Chandler gave an excellent performance in Peter Jackson’s 2005 King Kong remake as charmingly-smarmy actor Bruce Baxter. The acclaimed actor also seems to be a go-to for father-types in film and television, as well given his roles in Friday Night Lights – but more importantly J. J. Abram’s wonderful Super 8, in which Chandler plays a distant father to a monster-savvy son. We may be in store for something very similar with Chandler and Brown in KING OF THE MONSTERS.

Legendary has tapped Alex Garcia to oversee the film after Thomas Tull’s exit from Legendary, though Tull will remain involved with their Monsterverse franchise. Leadership seems to remain strong regardless, as all casting news for the franchise so far has been phenomenal; and if Chandler survives this sequel, he just may be reunited with King Kong in 2020’s GODZILLA vs KONG.

Either way, the acclaimed studio has a full monster mash in store with G:KOTM, as Rodan, Mothra, and Ghidorah are all planned to feature. Tonally, 2014’s GODZILLA was heavily based on TOHO’s original 1954 masterpiece, GOJIRA, and GODZILLA vs KONG will be a direct remake of 1962’s famous King Kong vs. Godzilla – so we may be in store for a direct remake of 1964’s Ghidorah, The Three-Headed Monster in 2019. All of this considered, Legendary truly seems to have listened to fans and the general public in regards to their 2014 effort’s teasing nature, and are set to deliver more kaiju action than we can handle starting with this year’s KONG SKULL ISLAND – which looks to be full of massive set pieces.

Variety has a bit more to say regarding the project’s behind-the-scenes details:

Legendary and Warner Bros. announced in late 2015 that all future “King Kong” and “Godzilla” films would be developed by Legendary and distributed by Warner Bros., starting with “Kong: Skull Island” in March. Legendary currently holds a distribution deal with Universal, but in order to re-team Godzilla and King Kong, the studio returned the rights to WB.

Chandler is coming off Netflix’s second season of “Bloodline,” which is about to go into its third and final season of production, and was recently seen in the Oscar-nominated drama “Manchester by the Sea.”

Alex Garcia will oversee the tentpole for Legendary. “Godzilla: King of Monsters” is set for relase on Mar. 22, 2019, with the monster mash-up “Godzilla vs. Kong” slated to bow the following year on May 29, 2020.

You can view their full VARIETY article, which exclusively broke the news of Chandler’s casting, here.

Note: There seems to be a bit of confusion online as to whether the sequel’s title will be “Godzilla: King of Monsters” or “Godzilla: King of the Monsters” with “the” included. Legendary’s press release lists the film as King of Monsters, as does Variety’s report above. We’ve reached out to Legendary for confirmation and have published an article regarding their response.

G:KOTM is scheduled for relase on March 22, 2019. For more on all things MONSTERVERSE, be sure to follow us here on Skreeonk.com and at our official Facebook page for daily news, updates, and reviews.