If you’re a Western Godzilla fan, chances are you’ve been (im)patiently waiting for a full remastered release of each Showa era Godzilla film for decades. Thanks to Criterion, that moment is finally upon us with the fruition of their long-rumored set, which will see the joint release of every single Showa Godzilla film as a complete set for the first time with:

The cover is retro, funky, and certainly aimed at pulling in non-fanatics with a strong design. Upon further inspection the rest of the set is, too, with new cover designs created by well-known artists for each film in the 1954-1975 era we all hold so dear. We’ll get to the art in a moment, however. First, let’s celebrate what Criterion managed to include for this release (in their own words):

In 1954, an enormous beast clawed its way out of the sea, destroying everything in its path—and changing movies forever. The arresting original Godzilla soon gave rise to an entire monster-movie genre (kaiju eiga), but the King of the Monsters continued to reign supreme: in fourteen fiercely entertaining sequels over the next two decades, Godzilla defended its throne against a host of other formidable creatures, transforming from a terrifying symbol of nuclear annihilation into a benevolent (if still belligerent) Earth protector. Collected here for the first time are all fifteen Godzilla films of Japan’s Showa era, in a landmark set showcasing the technical wizardry, fantastical storytelling, and indomitable international appeal that established the most iconic giant monster the cinema has ever seen.

Pretty fantastic, right? While it is a bit disappointing not to have both the Japanese original and U.S. releases accompanying one another (as we’ve become accustomed to), being treated to a release of each film in its intended form is certainly a best-case scenario in 2019. TOHO has grown increasingly – and justifiably – protective of these films, so seeing only a handful of dubs included should come as no surprise.

A wonderful amount of extras are headed our way, too, including limited commentaries, and – much more excitingly – interviews with legacy TOHO cast, crew, and creators.

Nothing, however, excites us as much as this – which guarantees that this set is going to deliver the best experience U.S. audiences have ever had with a home release of these classic films:

Yet all of this seems to be swallowed up whole by Criterion’s decision to treat this more as another one of their boxed sets, rather than a celebration of the Showa series itself. Whether TOHO was unwilling to license posters and art is unclear (and unlikely), but Criterion has absolutely put their focus on pulling a diverse group of artists in to flesh out their loud, exciting presentation. Even in their own breakdown of the set, they’ve chosen to list this grouping of artists last; putting a great amount of focus on this aspect of their release. 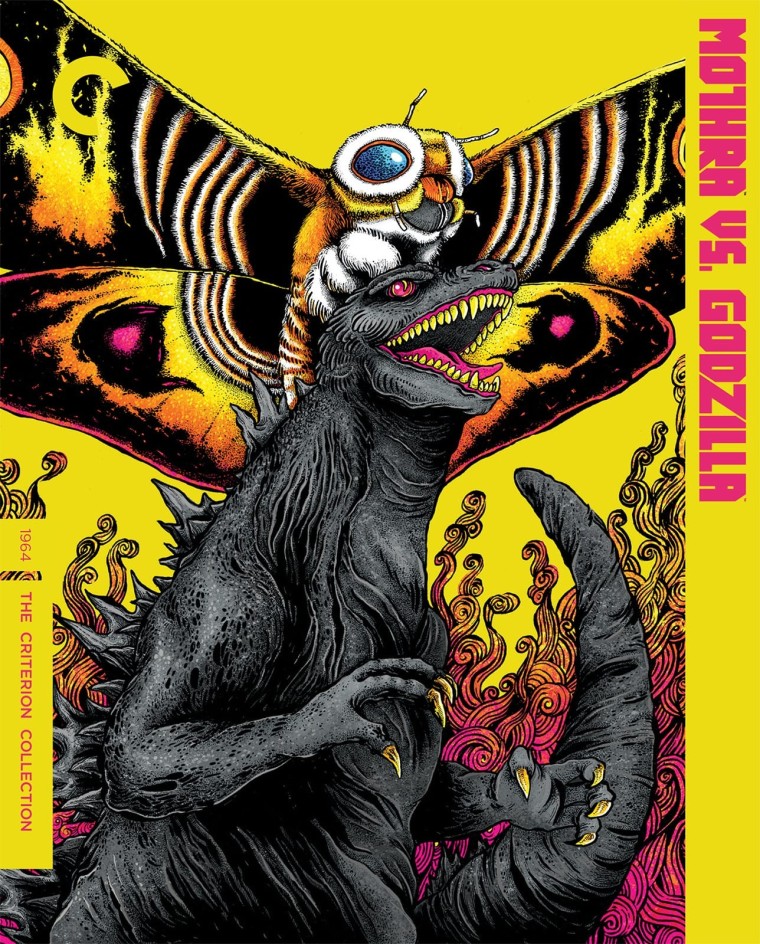 Will the neon, retro look pull in non-fanatics and sell this set online and on shelves? Absolutely. But is it what self-proclaimed fanatics would’ve hoped for? Not really. Not at all, in my personal opinion.

To release something as unapologetically Japanese as the Showa era of Godzilla films wrapped in new-wave, American pop art is… not a good choice… and it shows. Out of the seventeen artists listed, three are of Japanese decent. In turn, the “new covers” designed for each film feel disappointingly alien to the source material. This would’ve been an excellent choice if Criterion were releasing the U.S. distribution versions of these classics, but they’re not. This set is supposed to be a celebration of the original Japanese classics – and it looks the opposite of that.

Sure, a small minority of the artwork looks somewhat at home with the subject matter thanks to the Japanese heritage of their illustrators (alongside this excellent KING KONG vs GODZILLA entry by celebrated Western G-artist Arthur Adams – above), but the rest feel like celebrations of the artists themselves and their personal styles – and not the Japanese films they’re illustrating – which is hugely disappointing – and not at all the point of this release.

It feels like a huge step backward – like a return to the sometimes fun, but mostly abysmal VHS covers of the 90s where the artists were shown maybe a handful of images and asked to cobble something remotely recognizable together. Perhaps the worst of the lot is the cover illustrated/chosen for INVASION OF ASTRO MONSTER – which remains one of the best tokusatsu films ever made – yet it is presented with this: 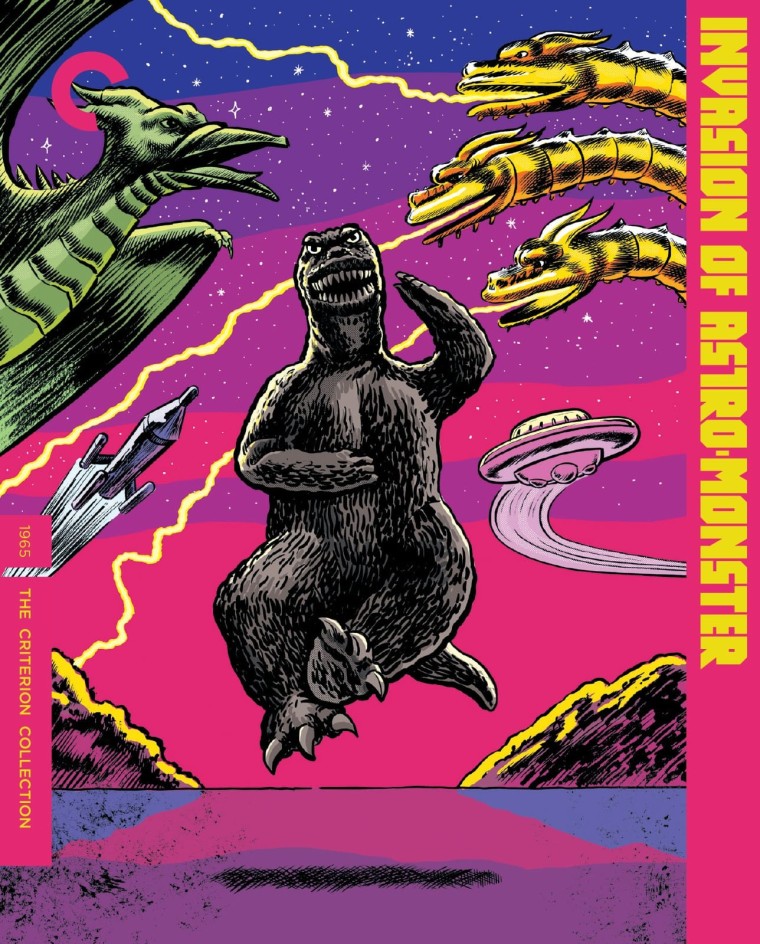 The artist hired for this cover, Benjamin Marra, is obviously talented, and did enough research to include good ol’ Dancing G on the cover – but stopped short of including a Rodan even from the same era as this film. Instead, pictured to Godzilla’s left is a painfully obvious Heisei Rodan, flanked by a passable(?) Ghidorah on the right – and the longer you stare at this cover the more obvious it becomes that this set is a celebration of Criterion being able to release these films rather than a joyous presentation of the films themselves.

Observe, then, the difference between such haphazard art and the undeniably excellent, fitting, and strikingly celebratory cover for GODZILLA vs MECHAGODZILLA done by Japanese manga artist Takashi Okazaki: 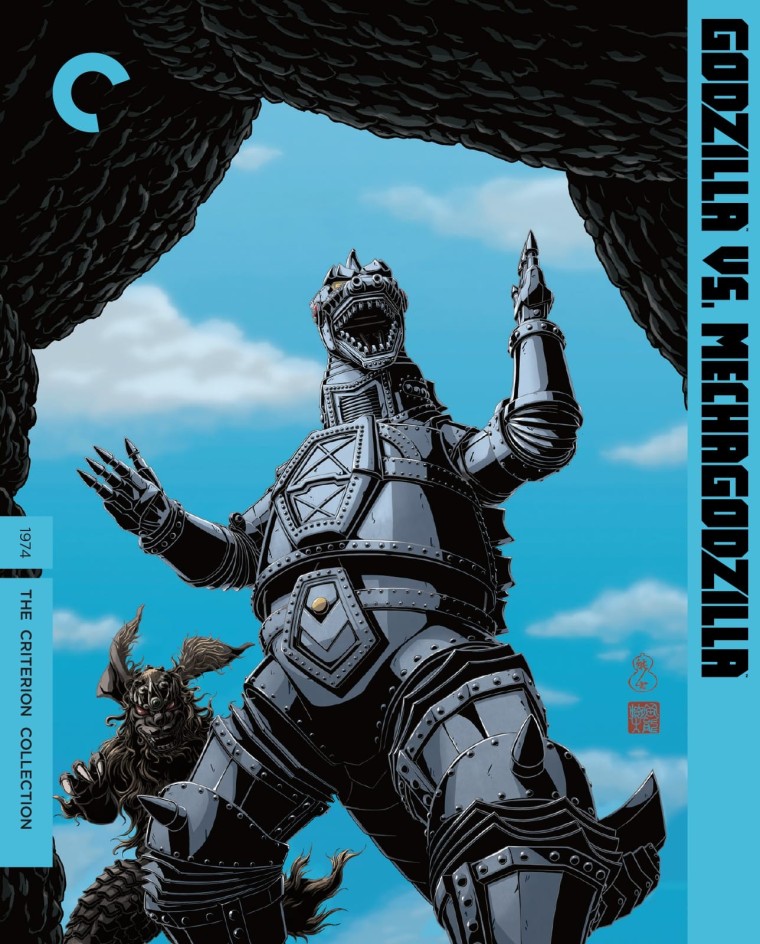 And this brilliant, gorgeously-eastern cover for GODZILLA RAIDS AGAIN by Japanese illustrator Katsuya Terada is another homerun. It is a loving celebration of his shared heritage with this film, its setting, and tonality:

Can you imagine an entire boxed set illustrated in this gorgeous, accurate, and loving style? I can – and I wish it was what we were getting. At the end of the day, it is simply jarring to have this set finally become available, only to see it completely void of the classic posters we’re so used to associating with these films. It would’ve been wonderful to have this set adorned with the incredible poster-work TOHO did in the Showa era.

Though, honestly, if the set would’ve been handed over to Art Adams and Sophie Campbell I would’ve been very happy with that, too, becuase Campbell’s DESTROY ALL MONSTERS cover is a delight:

Regardless of the sometimes-questionable art design for this set, it is an absolute thrill to think we’ll all be enjoying these films in non-compressed, completely restored digital copies come this October 29th – and if the set retails at it’s intended $180 it’s not only a great chance for fans to own the entire Showa series – but a fairly priced one, too.

We’ve included a full gallery of Criterion’s new covers below. GODZILLA: THE SHOWA-ERA COLLECTION is now available to order via their website – and will be hitting other major retailers, such as Amazon and Target, soon. Until then! 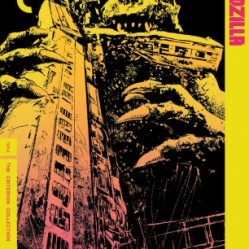 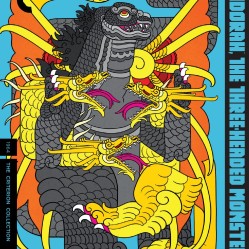 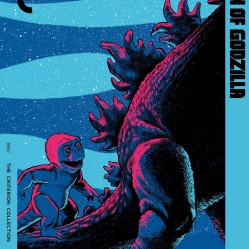 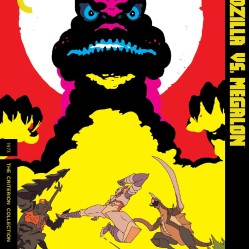