“Last part of the trilogy, and in my opinion the best.” We are lucky enough here at SKREEONK.com to have some exceptional members of the Kaiju Fan Network. One such member […]

“Last part of the trilogy, and in my opinion the best.”

We are lucky enough here at SKREEONK.com to have some exceptional members of the Kaiju Fan Network. One such member is Kyono Rei, who is kind enough to grace us with reviews of the ROM Trilogy. Kyono is of Japanese descent, and speaks English not as her second, but third language . Her following review is from the original Japanese version of the film. After that, we have the ever reliable, oh so wise Tohosaurus‘ take on ROMII:

Well, after the second film of the trilogy I din’t really expect this to be all that good, but i was pleasantly suprised. Keep in mind that like all films of the trilogy, this film is primarily aimed at children.

I’ll avoid spoilers, but I can say that they fixed most of the issues that plagued the 2nd film. I think this is because Yoneda is abck at the director’s chair. 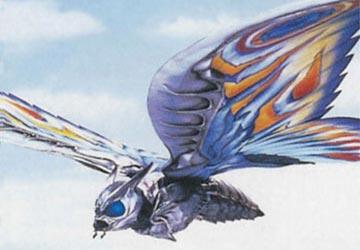 The film returns to the vibrant, fantasy-colorfull vibe of the first film of the trilogy and if you ask me, that is not a bad thing at all. The pacing is pretty good, you don’t get many boring moments here. Unlike the 2nd part, this movie features some very dramatic scenes and there is quite a bit of suspence. There are a few plot holes, but none are film-ruining and you can easily pass over them.

There is also one very cool plot turning point where the plot mades you think the film is over, but suddenly it turns the tables on the viewer and you relize that it is indeed far from over. I won’t spoil this, but its probably the most elegant and suprising plot turning point in kaiju films.

Overall the plot is fun, while staying frree from emotional drama and remaining very kid friendly.

This is another score by Watanabe, who made the music for the previous 2 parts of the trilogy. As before, the music performs its part well and does not detach from the overall feel of the film.

You will see Hano Aki and Kobayashi Megumi, that played the good and evil shobijin in the previous parts. Their acting is pretty solid by this point.

Tate Misato is the new arrival that steps in the shoes of Yamaguchi Sayaka as the new actress for the characte rof Lora, the emotional “good” shobijin. She is not anythign special, but not horrible either.

The characters actually grow with the trilogy. Belvera stared out as a pretty one-dimensional villain, but the paly of Hano Aki helped to changed this and by this movie, Belvera is more of an anti-hero and is arguably the most and memorable character of the trilogy.

We again get a new cast of child and adult actors who portray ordinary mortals n this film. The main child character is Shota and the boy that takes his role actually does a pretty good job for a child actor. Also the character is likable and not annoying like many other child characters.

The rest of the cast are arguably pretty poor, but the good thing is that they have only minor roles and don’t appear much during the movie.

Well King Ghidorah makes a comback and he looks better than ever. His design in this part is realy nice and impressive.

Don’t get me wrong, I like King Ghidorah (especially this design) but seeing him aghan was a bit like: “Oh. You again. How original. Suprising too.” Its just that this kaiju appears in so many films over and over again that I was hoping for something fresh. But its better to have him appear again in this cool-looking incarnation than to have a new, but bland and bad looking new kaiju.

We also have Mothra which takes a series of forms here. I won’t spoil this for you, but the new forms are both powerfull and good looking, solid designs.

First of all, the battle choreography is much, much better than the one from part 2. We get some creative fights here that include your old-school smash&bite moves of Showa origin (yes, including Mothra). I have to say that of all the films of the trilogy, I enjoyed the battles in this part the most.

Other special effects are better than in part 2, but again not really overwhelmingly amazing. There si some city destruction, but the buildings mostly fall apart clouded by smoke. You don’t get to see Showa-style miniature buildings sets get blown apart.

Other than that, there are a few fun things. The terrain and background look cool and crisp. Again, not to go into spoiler-full details, but there are scenes set in the cretaceous period and the prehistoric foliage looks cool. The dinosaurs however don’t look as nice as the background or the kaiju and to be honest they are not nearly as nice as dinosaurs from Jurassic park.
Even if they don’t look all that good, I am personally happy that decided to ahve some prehistoric scenes. I think it was a brave decision that adds some original feel and pure kid-style-fun to the film.

Shobijin get new clothes too, this time they seem somewhat like Thai-Chinese ancient princessess. Belvera the bad shobijin also gets a new outfit, but if you ask me its not as distinct or nice as her garb from part 2. 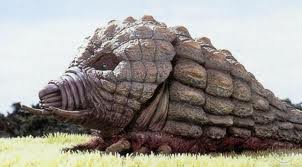 All in all this is a fun movie for kids, with a fast-flowing well paced plot, cool looking kaiju, nice and enjoyable battle scenes, unexpected plot twists and even some character developpement (which is pretty rare for kaiju films, ne?). While the film is not perfect, it provides quite a bit of fun and will likely be enjoyable for most kids. Definitally the best part of the trilogy.

Rebirth of Mothra III
A comeback compared to RoM II 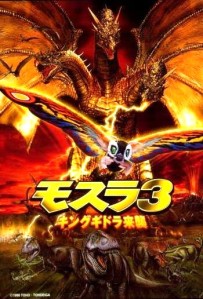 Before I get into the actual film, a word for region one audiences (Canadian and American). You can’t buy this film on DVD or VHS (you can buy RoM and RoM II as a double feature DVD). This hasn’t been released on DVD yet, but in the future at some point there will probably be a DVD/Blu-Ray release. Up until some point in August 2011 you were able to watch it for free (and totally legally) on Sony’s website crackle.com. In fact, the entire Rebirth of Mothra trilogy was available on Crackle, but at some point in August 2011 Sony took all three films down and as of this writing (early September 2011), they are still not back up. This has created some murmers as to Sony’s reasoning. Is a new DVD/Blu-Ray release in the works? At this point, we simply don’t know why.

After being totally disappointed with Rebirth of Mothra II, I didn’t have particularly high expectations for RoM III, but it was definitely better than I thought it would be. To start off with a complaint, it’s with Grand King Ghidorah. He looks great, but his appearance is just bizarre. A giant monster randomly comes to Earth and takes children hostage? It makes no sense, even as a children’s movie. My other complaint is that the monsters almost always look great, but the dinosaurs look pitiful. In the era of Jurassic Park, this films low budget shines through loud and clear here.

This one has almost no pacing issues, which is a great improvement over the last two films. That said, the plot of having two or three child leads with the screaming hero fairies and laughing evil fairy falls too closely in line with the films before it and it ends up being a little repetitive. Maybe it’s just me, but the film didn’t try to branch out. I’m still not sold on the time travel aspect of the film, because although it doesn’t create the billions of questions and controversies like Toho did the last time (Godzilla vs King Ghidorah, 1991), that’s probably got more to do with the RoM series having a lot less baggage to it in the first place.

Its monsters look the best of the trilogy. Leo’s standard form continues to look pretty good, but the best known Leo form is featured in this movie, Armor Mothra. Armor Mothra holds the title as far and away the most powerful Mothra we’ve ever seen and it looks the part. if a little stiff; it must be that excessive armor. Cretaceous King Ghidorah and Primitive Mothra are a bit uninspiring as designs go but their execution and quality is above par. Grand King Ghidorah is arguably the most powerful Ghidorah and he looks nothing short of great.

With a decent score, decent special effects, above part monsters, and much improved pacing, you could give it a decidedly average score of 5/10. For kids you could probably inflate the score a bit more than that. There are still a few too many unanswered questions and random-ness going on to warrant much better. Such a shame given the quality of the actual monsters here. I would be pleased if Toho would bring Mothra films back again someday, but I’d lose the overly child themes. It seems to allow the film makers to dumb down the movies as if they think kids will care less about plot holes or acting. It’s true, but it softens the experience for us older folks.