Here he is, Ladies and Gentlemen. Meet Legendary’s GODZILLA!

Did that concept art we revealed go viral or what? I’ve received ping-backs from over two dozen well known sites, and thats not counting all the blogs. Way to go, […]

Did that concept art we revealed go viral or what? I’ve received ping-backs from over two dozen well known sites, and thats not counting all the blogs. Way to go, fans! If this sort of hype and publicity keeps up online over the next year, the film will be a huge success.

But we are already on to bigger things. For those with the tendency to freak out and point fingers as so many fans feel the need to do- relax. These very closely represent what we will see on screen – but nothing is final until we see the actual film. I will say no more. Behold, the King Returns:

UPDATE: Clearer Photos! Check out A huge gallery of the GEncounters event HERE at Collider.com! What we’ve got here are a full body sculpt and a separate bust that are both official conceptual designs for the new Godzilla. They don’t match up exactly, but both sport a very similar armored-crocodillian physique and were specifically chosen to be shown to the public. With those two things in mind – I’d say its very safe to assume we will be seeing something very similar on screen.

UPDATE #2: And here’s an official look at Godzilla’s face from the GExperience in San Diego! VERY Return of Godzilla/1984 – Its not much, but from what I see I really love it! My one wish was that he be given character, and not just look like a mindless beast. This image confirms that I will indeed get that wish. He looks so menacing. 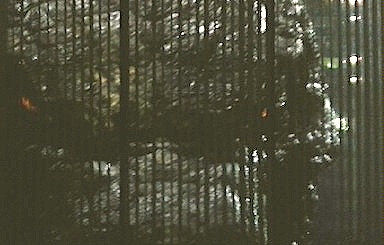 I’ve also managed to enlarge one of the photos from Collider – the only one that shows us a front view of the bust so far. The neck is very wide both horizontally and vertically. 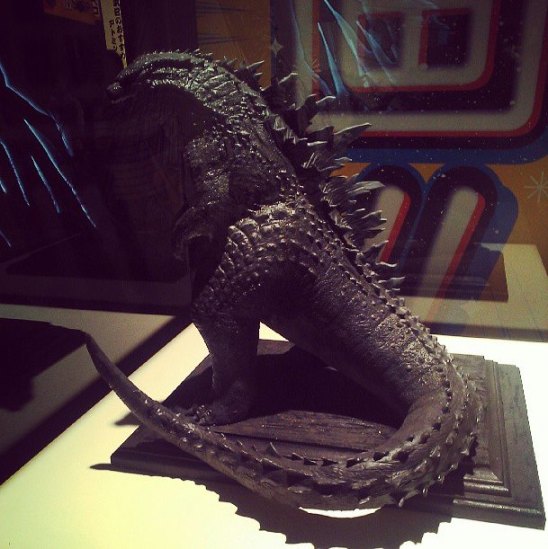 Our fandom’s own ever-awesome August Ragone spotted this first photo on Twitter, and it confirms everything we have been hearing – Godzilla does indeed stand upright, and he’s got quite the hulking look to him. The only part that looks really off to me are his feet – we dont have a clear look at them, but from what I can see they are rather…. small. Godzilla’s always had some huge feet (the better to stomp you with, Tokyo!) and these small appendages combined with the scaling/spike patterns on his skin really give the entire design a crocodillian vibe. Now that I look at the newly released photos of the bust, they definitely look to support the croc-ish design as well – notice the overlapping teeth. The shape of his teeth are undeniably crocodillian – as is the texture of his hide. He looks like an enormous mutant super-croc. I dig it!

From what we can see above the head bust is conceptually a bit different – but both sport such a heavy crocodillian influence and match up so well with everything else that we’ve seen that I think its safe to say we’re looking at a very close representation of what they intend to deliver on screen. Either way, he looks menacing, enormous – and like he’s born of this Earth. And like our current technology couldn’t do shit to pierce that armored hide.

The photo taken in the GEncounter (Godzilla’s face through the window) IS final, though. It was an enormous special effect that Legendary spent tens of thousands of dollars to make happen for these events. It represented a fully-realized version of their Godzilla design. That mug you see peering through the window is going to be pretty much identical to the film version. They may tweak it a bit, but that’s the closest out of everything else we’ve seen.

And I know its just what people do – but all the “those pics arent the design” talk is false. The pics of the body and bust sculpt are two concepts that show us what Legendary is trying to achieve with their design, and match up with every piece of official concept art/promo art we’ve seen.

They have tweaked the design since then – taking what they want from each, but thats the ballpark where they ended up. Legendary has created a grounded, naturalistic/crocodillian Godzilla with a hulking silhouette and armored hide – You’re looking at Legendary’s vision for Godzilla.

Expect much more to come,

China's GODZILLA vs KONG poster has been revealed - and it is absolutely killer!
The full, official design for SINGULAR POINT's #Godzilla
PRESS RELEASE: Hope everyone's been enjoying the incredible GODZILLA vs KONG hype! Here is the official cover for the film's upcoming concept art & making of book: GODZILLA VS KONG: ONE SHALL FALL. Thanks to our friends at Insight Edition for sharing with Skreeonk. Can't wait to get our hands on this one! This title will be released on May 21, 2021 and is available for pre-order on Amazon now!
Netflix announces an all new original anime series, Godzilla Singular Point, featuring a brand new cast and original story, set to premiere globally on Netflix in 2021.
Yusuke Nakamura's official poster for the new Osaka Godzilla Store has been revealed! The store will be opening in Shinsaibashi PARCO this November.
@marvel 's RISE OF ULTRAMAN #1 is out in the wild! The main @thealexrossart cover is brilliant. Grab a first printing if you can!