UPDATE: Hey fandom, a full update for you now. After further digging, we’ve just received an update from other sources and friends on social media that this is indeed independent […]

UPDATE: Hey fandom, a full update for you now.

After further digging, we’ve just received an update from other sources and friends on social media that this is indeed independent art from a fan. The artist has taken to twitter to claim the art as his own fan-art, but not before it was picked up by media and sourced as real. Our own Japanese source, who delivered many SHIN-GODZILLA exclusives to us during 2015 & 2016 has now followed up to apologize, and removed their own content. We want to apologize to our followers and the fandom for this false alarm, and hope those fooled in Japan also receive fair warning. We’ve reached out to several outlets just in case.

Skreeonk.com has been a part of the fandom for almost a decade, and we strive to bring news & enjoyment to the fandom. Thank you all for your support, help, and passion! 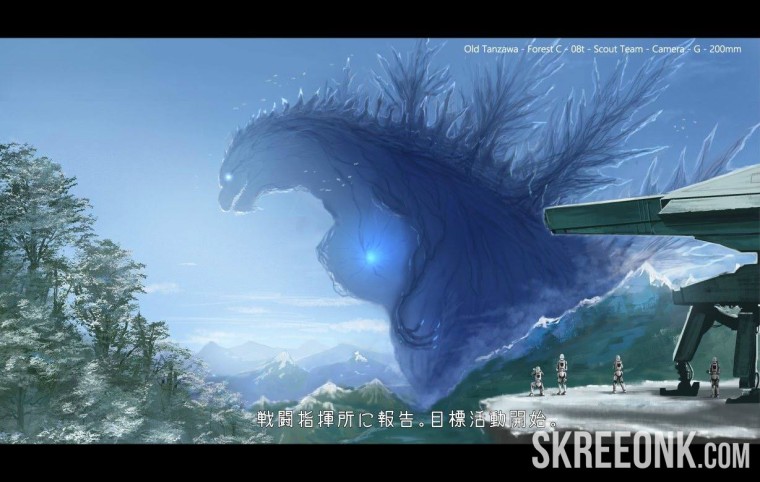 We still know next to nothing about the official story, but if anything seeing such a wonderful and almost ghostly Godzilla design is enough to get us excited. TOHO’s anime looks to be taking the Big G in an even more ethereal and spiritual direction than SHIN-GOJIRA this past year.

At first, it looks like Godzilla is radiating energy from his chest, but after further examining the artwork – it looks as if the Sun itself is shining through The King of the Monsters. He looks to have a very ghostly appearance. Will we finally see an incarnation of Ghost Godzilla? Is TOHO finally going full-earth-spirit, nature-incarnate with their most famous creation?

Last year (2016) saw the announcement of TOHO’s next Godzilla project; the very first official anime feature film starring the Big-G. It is simply titled ‘GODZILLA‘ as of now, and is scheduled for a 2017 release date. The exclusive image above remains our most in-depth look at the project to date, along with the accompanying piece below.

What do you think of TOHO’s newest Godzilla design? Be sure to let us know in the comments below, and join in the discussion on our FACEBOOK PAGE.

For more on the anime, visit the official Japanese site here. Until next time!