Skip to content
The New Ultraman Has Been Cast, And Daikaiju Are Confirmed for Classic-Based SHIN ULTRAMAN!
SHIN ULTRAMAN 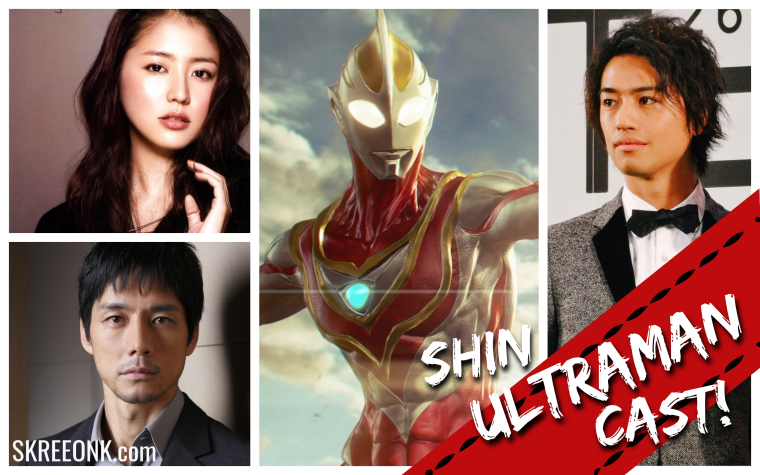 Yahoo Japan followed the public announcement of SHIN ULTRAMAN with a swift casting announcement early August 1st, revealing the film’s three principal actors alongside a few plotting tidbits – including confirmation of a modern-day setting and the basis of it’s story.

Update: Tsuburaya Productions has since updated their English description of the upcoming film, stating that it will indeed be an adaptation of the original 1966 classic series, Ultraman! Does this mean “Shin” will have double meaning within the title, and the return of Shin Hayata is upon us? Continue on within the original article below to find out more:

According to YJ and reporting agency Sponichi Annex, this latest iteration of Ultraman will be “similar to ‘Shin Godzilla’ [released in 2016], as the theme is what happens if Ultraman exists in modern society.” Grounding Ultraman into the present world of Japan is going to be an incredible task, and we’re sincerely thrilled to see how it plays out. But who will we be following on this venture?

Up first is the latest actor to portray Ultraman and his yet-to-be-named alter-ego: 37 year old star Takumi Saito will be taking on the lead role of the film. Saito is a multi-talented personality, having starred in many television shows and films in Japan, alongside releasing several albums with Nippon Columbia. A well-known face back home, Saito promises to add both charisma and star-power to the project, giving it a head start much like SHIN GOJIRA before it.

Saito’s character is described as “a man who becomes an Ultraman, [and is a] member of an organization that fights against giant creatures.”

Science Patrol, anyone? Not only does this hint at the inclusion of the classic agency, but confirms for us that – unlike the recent Netflix Ultraman Anime – that daikaiju will be present in this revamp, as well! These are fantastic tidbits to receive right off the bat, and will no doubt have Ultra-fans the world over rejoicing. Whether Saito will indeed be he latest iteration of Shin Hayata himself (the original Ultraman), or if we’ll see any familair kaiju faces, or if Ultraman’s organization will keep its classic, decidedly-old-fashioned name is not known, but one can only hope for all of the above.

Rounding out the main cast alongside Saito are fellow stars Nagasawa Masami (32), and Nishijima Hidetoshi (48), who “will also appear as members of the organization.”

Masami is another Japanese A-lister and has won several awards, including a Japan Academy Prize for Acting; her current status blossoming from a fruitful modeling and acting career. The 32 year-old has a filmography most older actors only dream of; having starred in over a dozen films and television shows in the past few years alone.Will Masami be giving us a modern iteration of the 1966 classic’s Akiko Fuji, one of the most beloved characters from all of Tokusatsu? We can only hope!

Opposite the younger stars is veteran actor Nishijima Hidetoshi (48), who was just recently nominated for Best Supporting Actor at the Japanese Academy Awards in 2019 for his performance in Samurai’s Promise. Specifics on his Shin character are not known, but if he has been cast as an iteration of the 1966 series’ grizzled Captain Muramatsu as leader of this generation’s “Science Patrol” – oh – we’re all in.

While the first draft was reportedly finished back in February of this year, we may have a bit of a wait ahead before we learn anything else of the project. Hideaki Anno, who is developing the project with his SHIN GOJIRA directing partner Shinji Higuchi,has yet to finish his latest Evangelion project (3.0+1.0). Once he does, he will be joining SHIN ULTRA full time to finish the screenplay and flesh out the film for Higuchi to direct. Anno’s Evangelion studio, KHARA, is on board as a co-producing studio alongside TOHO and Ultraman’s home, TSUBURAYA Studios. TOHO will be marketing and distributing the film, and is currently aiming for an August 2021 release date.

Are you excited for Ultraman’s return to the big screen and the talent behind it? Be sure to let us know in the comments below or on our Facebook & Instagram pages. As always, we’ll have more as the film continues to develop.

Now here's a phenomenal Mechagodzilla design! Would you have preferred this version in the film?
If you aren't already excited for @insighteditions GODZILLA VS KONG concept art book, then you should be for the #DOUG concept art alone!
SAVE THE EARTH! Happy Earth Day, kaiju fans!
China is celebrating GODZILLA VS KONG's success with this absolutely stellar new #MonsterVerse poster!
[Review - swipe for official hi-res stills]
TOMORROW, we join the rest of the world in seeing GODZILLA VS KONG! What a wait it's been.